Continuing upstairs for the rest of the MCA's Universal Experience: Art, Life, and the Tourist's Eye exhibition, the best is yet to come. I apologize, though, for the shortage of images this time.

After ascending the elliptical stairs past a couple small galleries, one is immediately struck by the bright orange carpet laid across most of the fourth floor. Attributed to Rudolph Stingel, the artist responsible for carpeting Grand Central Terminal last year in a patterned graphic. Here the effect is just as jarring, adding an explosion of color to the otherwise colorless galleries.

Michael Workman's review in Newcity talks about the orange blinding the visitor during the daylight hours as it's reflected off the white surfaces, though visiting after sunset the effect is different, yet of equal interest. With the contrast between the illuminated galleries inside and the darkness outside, the gallery windows act like a mirror, creating the illusion of a space twice as big.

This orange-carpeted space is littered with surprisingly comfortable wooden chairs grouped around suspended monitors, intended to resemble an airport but feeling like something between an airport and a museum. Regardless of the intention, it's a great space to sit down in, not only for the film and videos but for the enjoyment of the space. Since I don't have a picture of the gallery, you'll either have to take my word for it or just visit for yourself. I definitely recommend the latter.

Once past the orange carpet and into the southwest corner of the fourth floor, the effect of the color is almost immediately forgotten. Sitting in a mirrored space is Urban Landscape by Zhan Wang, containing hundreds of pots, pans, utensils, and other items all in stainless steel. The effect is intense.

Stainless steel is found in other parts of the exhibition, most notably Jeff Koons's Rabbit, but here - combined with the mirrors - the symbolism isn't as subtle. We are confronted with a number of standardized objects with their ageless shine, their position based on Chicago postcards the artist saw (in 2003, the same exhibit used dry ice and irregular boulder shapes to resemble the Chinese landscape), definitely a critique of Western ideals and ways upon other cultures.

Everybody's favorite "bean" artist, Anish Kapoor, contributes a piece titled My Body Your Body from 1993. Unlike his Cloud Gate in Millennium Park, this piece seems to absorb light rather than reflect it. What at first glance is a two-dimensional painting reveals itself over time, much like a James Turrell light installation, to be a deep abyss cut into the wall. Looking up at the skylight, it's apparent that the wall was built out to accommodate the artwork. The blue pigment is so consistently devoid of depth that the overall effect is eerie. If it were possible to reach into it I would have, but we are left to our mental constructs, which contributes to its eeriness. 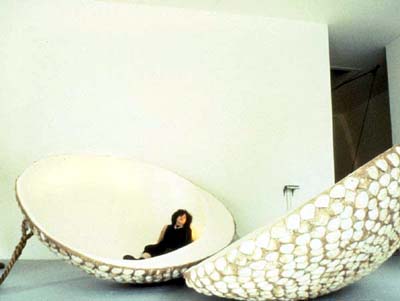 Nearby is Vito Acconci's Convertible Clam Shelter (above), two large clams that invite interaction. A softly-glowing built-in orb and relaxing music lull the weary visitor into a relaxed state, an interesting paradox for something (visiting an art museum) that's typically seen as a meditative act. But with MOMA's recent expansion and the blossoming of museums all over the world, the experience of going to a museum is changing - towards something more akin to a shopping mall than a place of refuge - definitely something this exhibition is keenly aware of.

Many other artists have works on display on this half of the fourth floor, from Warhol and Smithson to Felix Gonzalez-Torres and Philippe Parreno. But on the other half of this floor, only a few pieces are on display, with two of them taking up the majority of the space.

Peter Fischli & David Weiss's Visible World collects thousands of brightly colored travel photographs from all over the world, culminating 15 years of globetrotting. These small format transparencies lie on a continuous 92-foot light table. Many images are familiar tourist sites, be them natural or man-made, though scenes of daily life are interspersed, indicating the tourist value of "culture watching", or the flaneur. The table takes up most of the space, one wall showing Andy Warhol's 8-hour ode to the Empire State Building.

Thomas Hirschhorn's Chalet Lost History takes up one full gallery, an immersive installation made with cheap materials and containing everything from refrigerators and fans to sex objects and pages from hardcore magazines. A consistency across each of the three rooms is Egypt, be it through books, cheaply-fabricated crypts and pyramids, or the space itself, a cramped environment that in some ways replicates the tombs of past pharaohs. It's a somewhat confusing work that can be difficult to digest for some people, but its scale and immersive qualities are undeniable. Aesthetically, it's not my thing, but the act of actually moving through art I find appealing.

To loosely sum up, Universal Experience has something for everybody. The exhibition is much like traveling to a distant land that holds a variety of objects and images to be discovered.