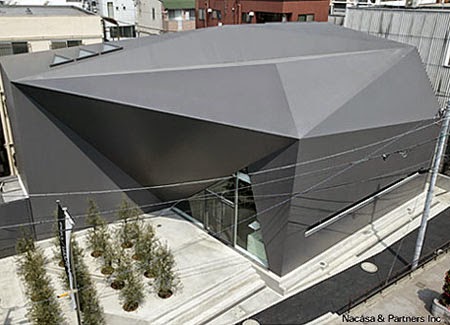 In some way's hhstyle.com is Japan's equivalent of America's Design Within Reach: both sell designer furniture and other objects to their respective markets via catalog, internet, and stores. In this last - the physical realm - hhstyle.com outshines DWR. For their first - their flagship - store, hhstyle.com called on the talented Kazuyo Sejima, who designed a simple, yet effective display space for their merchandise. Just down the street from her impressive Dior Store on Omotesando (Tokyo's ultra-chic street also home to Prada, Comme des Garcons, Louis Vuitton, and Tod's; designed by Herzog & De Meuron, Future Systems, Jun Aoki, and Toyo Ito, respectively), their Harajuku flagship presents the pedestrian a veiled transparency that draws them into the store. 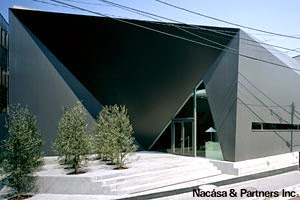 But for hhstyle.com's new "casa" location near their flagship, the veiled transparency gives way to a monolithic container that's equally intriguing for its folded exterior. Designed by Tadao Ando, the building appears like anything but a Tadao Ando building. The carefully crafted concrete and glass exteriors of most of his designs is eschewed in favor of a painted, seamless skin that focuses attention on its form and away from its (lack of) materiality. 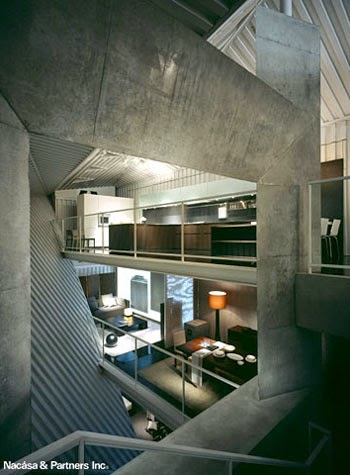 The interior is an inverse of the folded exterior, these defining surfaces covered in corrugated metal. Triangular, concrete columns and beams sit in the middle of an atrium-like space, surprisingly more vertical than the squat exterior portends. The home furnishings ring the odd-shaped space on multiple levels linked by stairs. It's an otherwise window-less space that does have a few skylights (noticeable in the exterior shot at top); the overall effect relies on artificial light to highlight different parts of the building and/or showroom. 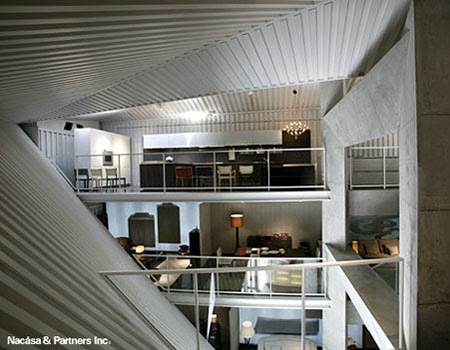 Does this design signal a new direction for Ando? Or does it fit in with his grand ouevre? Ando has always been a sculptural architect, though he's often limited his means to concrete and glass, brought alive by natural light. Here, the sculptural aspect is definitely evident, but rather than fall back on any tried-and-true design technique or style, he's found something appropriate for the problem at hand: designing a showroom that wants to control light and lessen distractions to the outside. While it may not bear the stamp of the architect, it is definitely a distinctive design that should further the client's image. 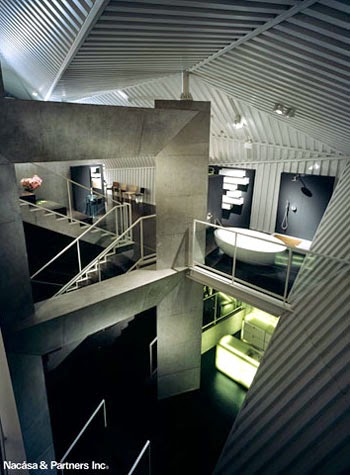 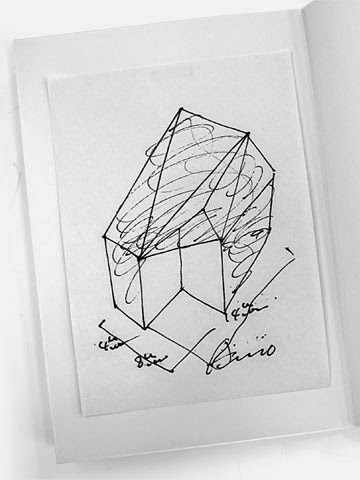 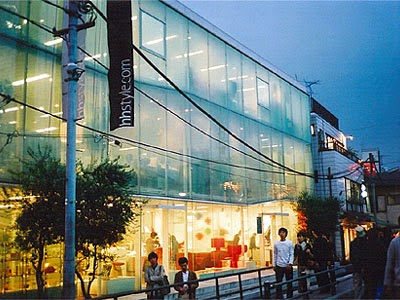