An Anniversary of Sorts

St. Louis's Riverfront Times covers a reunion of Pruitt-Igoe residents, the 28th since the destruction of the infamous housing project in that city's north side. Designed by Minoru Yamasaki years before he left his ultimately short-lived imprint on New York's skyline with the World Trade Center towers, these other twins (the Pruitt and Igoe complexes were bisected by Division Street) became a symbol of Modern architecture's death upon their implosion, not even twenty years after they opened. But like most ideological statements, facts were ignored, particularly the actual living conditions in the project as told by the residents, many who cherished their time there. RFT's feature includes conversations with residents who reunite every year to celebrate their time together years ago, a refreshing take on an oft-abused (ideologically) place that is long but definitely worth reading. 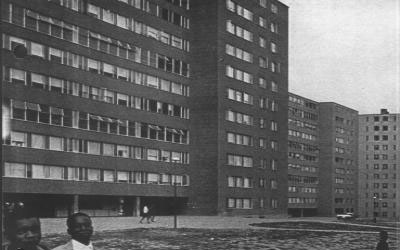 
:: "The Case History of a Failure", published in December 1965's Architectural Forum.
:: Wikipedia's entry.
:: "Why They Built the Pruitt-Igoe Project" by Alexander von Hoffman.
:: Excerpts from Oscar Newman's Defensible Space, with illustrations.
:: "Pruitt-Igoe and the End of Modernity".
:: Aerial view of site as it sits today.