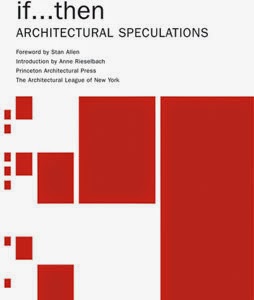 The sixth in an annual series of publications that features the winners of the Architectural League of New York's Young Architects competition has the rather vague-sounding theme "if...then". Referring to the binary programming of computers (if a then b), this does not translate into the six chosen architects being slaves to the computer, cranking out blobs and the like. Instead, each architect is grounded in the computer's importance to architectural practice - especially in design and production - with a variety of foci and results.

Fernando Romero (LCM) has built the most of the six winners, perhaps owing this trait to the inexpensive construction in Mexico City, his creative small-scale house designs having lead to a high-rise commission now under construction. Tom Wiscombe's EMERGENT won the Young Architects Program at PS 1 a couple years ago; his projects presented here are the most overtly computerized of the bunch. Studio Luz's focus appears to be small interiors, such as restaurants and bars, and other types where surface and skin are of the utmost importance. Another competition winner is Mitnick Roddier Hicks, whose design of the Spertus Institute for 2002's Burnham Prize is a tough act to follow. The Borden Partnership cranks out house designs like they're going out of style, many of them with strong concepts for alternative ways of living. And finally Miloby Ideasystem embraces branding as an integral component of architecture, something that sets them apart.

Beyond the computer analogy of "if...then", the projects presented broadly illustrate the importance of that sort of thinking (if I design this/that way, then what will happen?) towards what they design, what the organizers term architectural fictions. While if...then may have been more predictable in the time of Modernism, now it is a flexible idea that requires new ways of approaching design, something these architects share in their own unique ways.