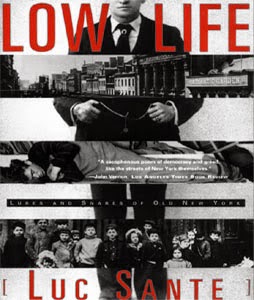 Sante's book about lower Manhattan in the late 19th and early 20th centuries is a beloved account of the seedy side of the city. After setting up the urban landscape of those less fortunate, the author recounts stories of theater, booze, drugs, gambling, prostitution, gangs, crooked cops and politicians, orphans, homeless, those who were born in the gutter and stayed in the gutter. The geographical center of the book is the Bowery, a 1.5-mile stretch that runs from present-day Chinatown to the East Village, still home to the flophouses and saloons that began in the time of this book (though the impending destruction of McGurk's Suicide Hall is an unfortunate erasure of the city's history). Physically, the Bowery parallels Broadway and in Sante's mind this parallel was more than that, as the same vices gave rise to each thoroughfare, the former for the lower classes and the latter for the upper crusts of society.

Through extensive and diverse research, Sante paints a vivid picture of New York at a time that seems so remote but still exists today in the polarization of classes and the its seediness. It's a history that is many times glossed over in favor of stories of money and power. But to truly understand the city, one must know of its lows as well as its highs, and for the lows, Sante's unique book is the best yet.