The always wonderful Things Magazine posted today about billboard advertising, spurred by the clever one below for a suntan lotion. 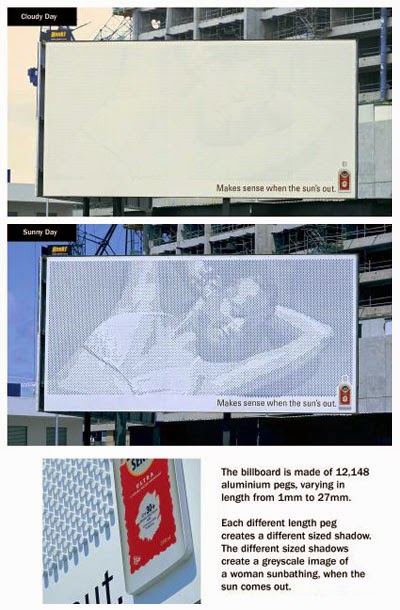 While I'm often dismayed by the fact so much creative effort is expended on something so fleeting as the always-reinventing-itself-to-give-the-consumer-something-new world of advertising, this billboard is reminiscent of a mural along the Kennedy Expressway in Chicago titled Shadow Mural, commissioned by The Catholic Charities of Chicago. The mural is made from hundreds of uniquely-shaped metal strips cantilevered from structural panels to depict Jesus washing the feet of the disciples flanked by the heads of St. Vincent DePaul and Frederick Ozanam, the founder of the St. Vincent DePaul Society. 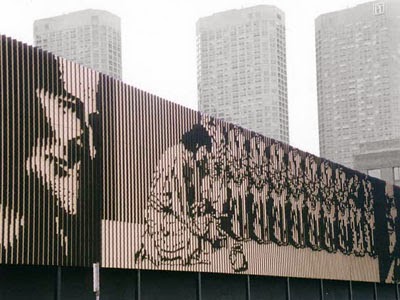 Things goes on to mention Delete!, "which stripped out all extraneous white noise from advertising in a single street in Vienna." A few years before Delete!, Pasi Kolhonen investigated the inverse, removing the context and leaving the advertising in photographs of the streets of Helsinki.

So we have a couple installations/proposals that deal with the pervasive overtaking of our visual landscape (particularly in cities) by advertising and two types of advertising that recognize this and respond with creative and comparatively subdued expressions. It's like an urban-scale tug-of-war without an end in sight. As long as there's something to sell (commercially or religiously), there will be advertising of some form, and as long as people look at billboards, advertisers will use them. Unfortunately, when advertisers come up with clever responses like this, it's hard not to look.
Email Post
Labels: arch-advertising