Following up on the BIG NEWS in these parts, more and more people are weighing in on the plans for Fordham Spire, planned for Chicago's Streeterville neighborhood.

WTTW's Chicago Tonight had Adrian Smith of SOM, WBEZ's Edward Lifson, and the Sun-Times then-staff reporter-now architecture critic Kevin Nance on Tuesday discussing the proposal. I caught about the last half where Smith, the designer of the Trump Tower just down the river from the site, actually said the two skyscrapers would complement each other, unlike his client who strongly opposes the Spire. Lifson spoke about Calatrava's charisma being a help in actually getting the building off the ground, while Nance asserted that the building would not be a target for terrorists, since it's residential/hotel and therefore doesn't carry any symbolic meaning. They ended by giving their odds on the project's outcome: Smith giving it a 10% chance, Lifson thinking a Calatrava tower will rise but in a different form, and Nance giving it a 50% chance. Last night's show featured a discussion with the designer, though I missed that one. Too bad Chicago Tonight - ahem - doesn't archive their shows online.

Nance covers the press conference where Calatrava speaks but fails "to demonstrate why he is one of the world architecture scene's few genuine superstars," but then "Calatrava picks up a felt-tip pen, walks to a nearby easel, and starts to draw....It might as well be a magic wand." 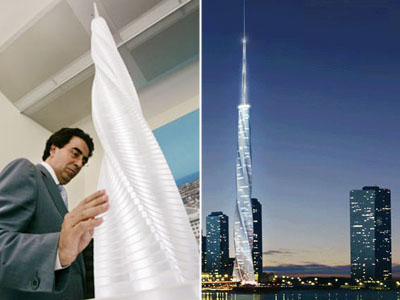 Calatrava stabilizes the Spire; the drama at night

The Tribune yesterday published not one but five articles on the project.

And finally Peter Slatin reports that Fordham Spire "signals that developers now believe that today's best-known architects not only sell condos, they sell financing." He illuminates us to the developer's previous buildings, and their problems, coming to the conclusion that "a great designer is commoditized, and a great city is caricatured."

6pm Update: Forgot to mention that the upcoming Hello Beautiful! will be a live call-in show revolving around the Fordham Spire, with Martha Thorne (Associate Curator of Architecture at the Art Institute of Chicago), Santiago Calatrava, Blair Kamin, Kevin Nance, and YOU. It airs at 10am CST and is also available as a live stream via the link above.

Update 07.29: Lynn Becker's head hurts from all the Calatrava commotion.

Update 08.01: A bunch more articles hit over the weekend: