In last Sunday's Chicago Tribune, Blair Kamin argues for "a need for the city [of Chicago] to develop a planning framework that offers specific guidelines about where tall towers should go, how they can be placed so they block as few views as possible, and how they should behave at ground level." This article is definitely responding to the Spire-Tweezer one-two punch levied in the last couple months. Below's "composite photo prepared for this story," illustrates the crowding of the two towers and their proximity to Trump's tower down river (though this view is slightly misleading, as was mine in the link above, as it's a view that will rarely be experienced, except as one flies by in a plan or sails by in a boat). 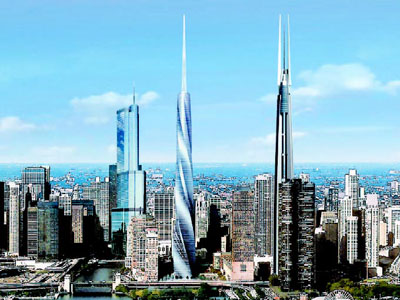 Elsewhere in the article, Kamin uses Park Tower and the Peninsula Hotel as an example of "a growing movement in the design community to educate the development world that tall, slender buildings are not bad things," in a quote by Lori Healey, the city's new commissioner of Planning and Development. He states that the soaring Park Tower is more appealing than the short and squat Peninsula, though there's more going on than tall vs. short. Park Tower's location pretty much dictates a tall tower, not just because of its relationship to the city's historic Water Tower, but because of the unimpeded views to the east and the lake. Beyond the Water Tower is the equally-historic fire station, the MCA, and a park. Each of those should be around a long time, guaranteeing views for residents of Park Tower. The Peninsula, on the other hand, is a hotel (where views are important but not as much so as in residential) and faces tall buildings to the east. While its architecture may be as equally uninspiring as Park Tower, its stoutness alleviates the areas spiked towers, opening up the Water Tower to some sky and sun. Basically, both practically and as urban design, both types are worthwhile.

This gets to Kamin's conclusion, where he quotes Ralph Johnson and agrees that the city should dictate where "wall" buildings go (Grant Park) and where tall buildings go. Furthermore, retail and other "public" uses should line the ground floor below the ubiquitous parking garages that usually sit below towers. I definitely agree that we need a lively pedestrian-level streetscape, though the location of tall and short buildings should be more flexible and perhaps even on a case-by-case basis, taking into account other nearby developments.

What isn't mentioned in the article is the FAR bonuses that the city has provided in its latest zoning revision. If a developer sets aside space for a space like a winter garden or an arcade, or pushes parking underground (these and other bonus schemes are definitely costly but may be outweighed by the additional units or leasable space created by the bonuses), they gain FAR. And given the lack of a height restriction in most of downtown, it's no surprise that developments are aiming higher. While there's bound to be arguments over how to achieve a well-scaled and quality city environment, it's going to have to be done by the city, be it via zoning reform or the like. And the way things are going now, that's not very likely while a certain Mayor's in power.

Update 11.18: The following snippet written by Ada Louise Huxtable (emhasis added by me) that's featured in The Architect's Newspaper's article "On Criticism" (worth reading, by the way) seems particularly apt in regards to the issues discussed above, even though it was written in 1980. The fact it was written 25 years ago (in a NYTimes article called "Zoning: The End of the Line") shows that lessons are hard to learn and practice when there's a way and an incentive to do something else.


In an attempt to legislate an impossible balance between a profitable city and a livable city, New York has created a monster—call it Frankenstein zoning. The process by which good intentions and innovative practice are turned into an urban nightmare has been gradual and technically arcane. But what has been happening, insidiously and overtly, is that the whole idea of zoning has been turned upside down. It has been subverted from a way to control building bulk and size to a method for getting bigger buildings than ever.

If that seems like an anachronism, it is; exactly the kind of overbuilding is being encouraged that the law was designed to prohibit. The result, which is just beginning to be visible, is the rapid appearance of ranks of oppressively massive, sun- and light-blocking structures of a size that we have never seen in such concentration before. Their outline and impact appeared first on Madison Avenue from 53rd to 57th Street, with the 42-story, block-long Tishman building from 53rd to 54th Street, another tower across Madison at 55th Street, and the gargantuan AT&T and IBM buildings, from 55th to 56th, and 56th to 57th Street. This enclave of blockbusters was joined by the huge Trump Tower looming on the Bonwit Teller site at 56th and Fifth.

When the first of these immense projects designed under the city’s revised 1961 zoning regulations appeared, such as Olympic Tower on Fifth Avenue or Citicorp on Lexington, they seemed unique; as singular structures they were more interesting than overwhelming. As a standard to be replicated, however, they have become cautionary examples…What must be understood is that this wave of bigger-than-ever New York buildings is not some overreaching passing fancy. It is the new and future norm…The bottom line is that the developers build what they are permitted to by law.

These new buildings, therefore, are equally revealing of the manipulative, negotiable, and mutable art that New York’s zoning has become. And because what New York does in zoning is emulated by the rest of the country, whether it is innovative and constructive or dangerous and foolish, other cities will probably follow an example that has evolved from a reasonable system of controls, including creative attempts to balance restraints with public amenities, to an ad hoc exercise in horse-trading that is a clear environmental disaster.