I'm not talking about jeans, I'm talking about buildings. In places like Chicago, tall buildings tend to get all the press. But not all sites are suitable for 30+ story condo and office towers — especially with the city's parking requirements — so the occasional low-rise building rises with a bit of flair or at least some design sense. The best the city has seen lately is definitely Ralph Johnson's Contemporaine in River North. But has that design spawned more quality output? Let's look at some recent and under-construction buildings and see. 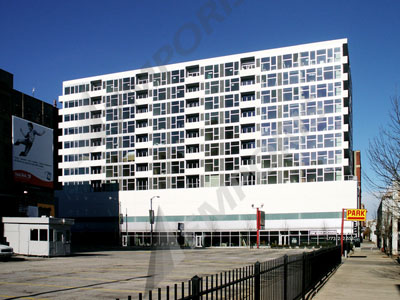 This eleven-story residential building in River North is by the same developer as the Contemporaine, CMK Companies. Credited to both Brininstool + Lynch and Perkins + Will on the Emporis web site, the design is more flat and restrained than the Contemporaine. Half the residences face the street, while the other half face the back alley. The only corner units face the elevated tracks, a somewhat unfortunate circumstance. Both the units and the building are ultimately pretty typical, only clad in a a full-height window wall with a random window pattern as an attempt to give it distinction. The "band of light" at the parking garage looks like it could give further distinction at night. 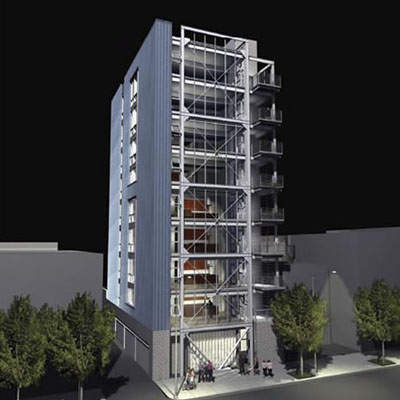 Just down the street from 630 North Franklin is a narrow, nine-story residential building by Seattle's Miller Hull Partnership, developed by Ranquist Development whose tastefully modern houses and small condos dot the Chicago's west side. This design appears to be a departure for Ranquist, as Miller Hull strives to relate to "the Chicago steel and glass I.I.T. School." An exposed steel frame with diagonal cross-bracing is articulated in front of a full-height glass wall on the building's south and north facades. Balconies anchor the southeast and northeast corners and a mix of masonry and metal panel covers the side elevations. While the bracing doesn't stand out, as in the Hancock, its subtle presence gives the facade a layering and depth not found in many multi-family residences these days. 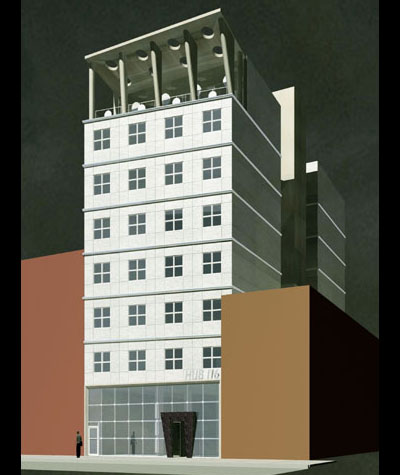 Further south, but still in the River North neighborhood, is HUB 116 (a seemingly techno-savvy name that is actually just a truncation of its address: 116 West Hubbard), an eight-story office building developed by Dumas Associates and designed by Obora-Phillips. The distinctive feature here is obviously the swiss-cheese roof that's cantilevered from leaning columns, apparently extending the roof beyond the street facade. The rendering clearly shows a post-modern articulation of base-middle-top, a tripartite division that architect's can't seem to abandon. Here, unfortunately, the changes are abrupt, without apparent relationship to each other or the building's context.