Here's part two of my two-parter on Hotel Puerta America in Madrid, Spain. See part one for the corridors. 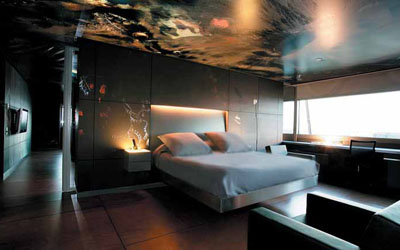 Jean Nouvel's penthouse should be familiar for those that have seen his Hotel in Lucerne, Switzerland, where the ceilings were covered with stills from movies. Here, the imagery covering the dark surfaces appears aquatic, ironic for the top floor of hotel rooms. 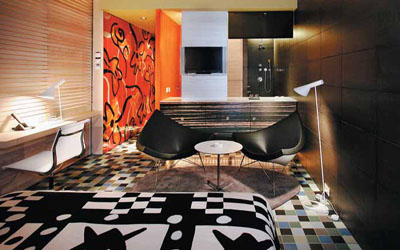 On the 11th floor, Mariscal and Salas continue their whimsy. Each surface seems to be a different pattern or canvas for exploration, though its cohesion into a whole is not very successful. 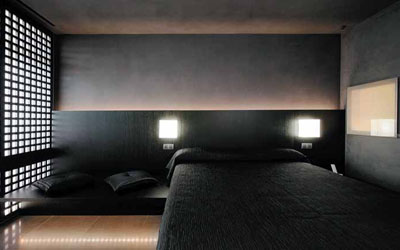 Arata Isozaki's rooms recall traditional Japanese architecture without copying it. The screen at left is the most important device for this effect, while also removing the room from the hotel itself by creating its own shell separate from the container. 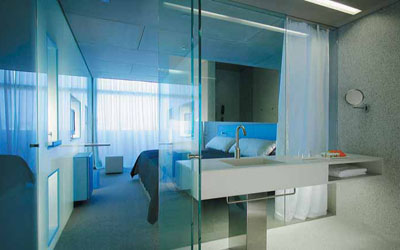 Richard Gluckman's rooms use glasses of varying transparencies and artificial lighting to create soft effects in the different rooms. 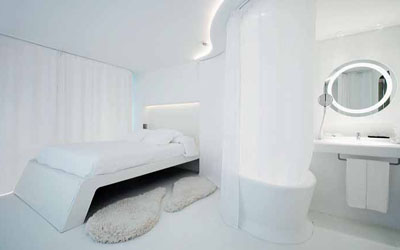 Kathryn Findlay's 8th floor rooms are whiter than white, a perfect setting for a whitening toothpaste commercial. The hygienic character of the rooms awaits the splashes of color that come from human presence. 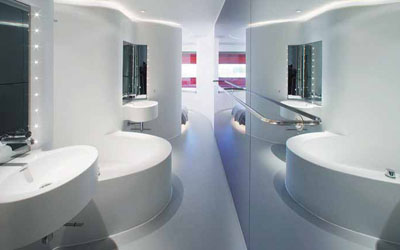 Ron Arad's floor is another white room, though splashes of intense red are also present. Arad picks up on the curving walls of the elevator lobby and corridor by curving just about everything in site. 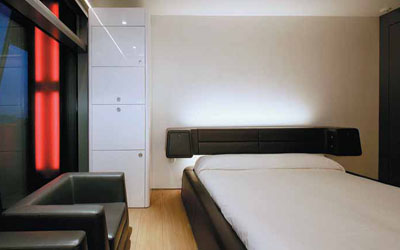 Marc Newson eschews the intense red of the corridor for a more subdued palette of blacks and whites, understandable, as red isn't ideal for sleeping. For the most part this design is simple surfaces and custom furnishings, the latter of which can't carry the space. 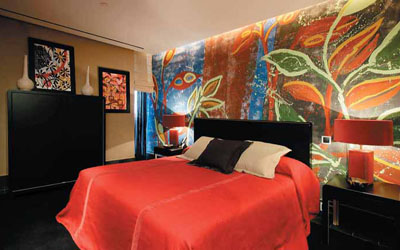 The fifth floor by Victorio and Lucchino is super-saturated, like every surface was awaiting some color and the designers didn't say no. 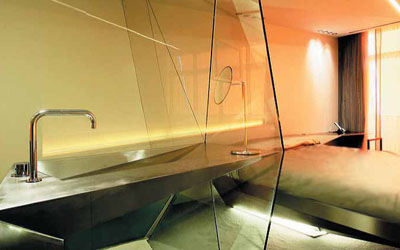 Plasma Studio's rooms aren't as crazy as the corridors, but the various reflections and refractions created by the triangular "pleats" in the walls continues some of the corridor's disorienting effects. 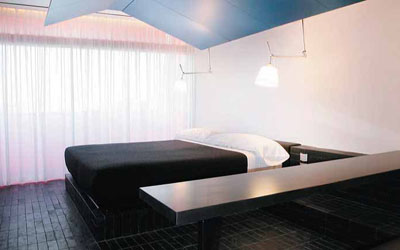 Somebody forgot to tell David Chipperfield to work on the rooms, too. Sure the floor is nice, but the blank white walls and out-of-place ceiling plane don't interact with the space enough to create a cohesive whole. 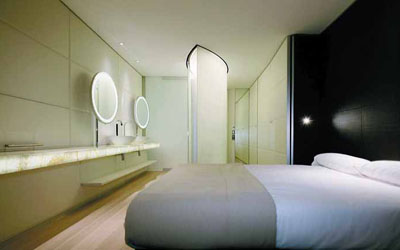 Norman Foster's rooms are also overly simple, limited to blacks and whites, with some illuminated onyx for effect. 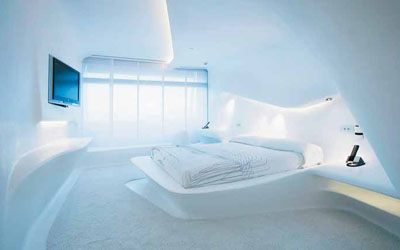 Finally, Zaha Hadid's rooms tie together with the corridor better than any other architect. Hadid designed everything down to the sheets (Will we be seeing this at a Target in the near future?). The awkward fit of the television illustrates that her organic flow isn't something that's widely embraced by most of popular culture; people still opt for rectilinear rooms and furniture to match.