Apparently, the combination of the two yields problems. Specifically -- JS Online is reporting -- at Martinifest, a semi- formal event organized by Clear Channel Radio on February 11, "people threw up, passed out, were injured, got into altercations and climbed onto sculptures" in the Santiago Calatrava-designed addition to the Milwaukee Art Museum. According to the article, two sculptures have been removed for review due to events such as "[a group of four young men] were standing on it [a bronze sculpture by Gaston Lachaise], grabbing the boobs, and somebody was just taking pictures with a cell phone." It also indicates that the bartenders ran out of mix early in the evening, thereafter pouring straight shots of vodka to revellers. David Gordon, the museum's director said in the article, "it was not an appropriate event to be held in the museum, and we have reviewed our procedures for bookings." 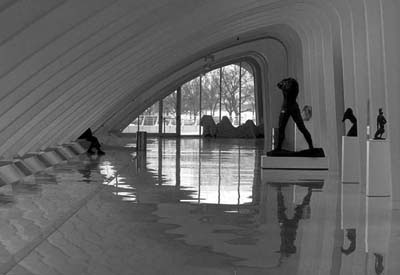 Even without the knowledge of straight vodka being served, this incident shouldn't come as a complete to shock to anybody, the museum included. Since the opening of Calatrava's addition, it's apparent the new structure is more about making money via events and other concerns over presenting art: the main space is an event area, with a bookstore, a cafe, and a small gallery also included. Here, it's the art kept in the corridor above that was potentially damaged. This isn't to say that the museum shouldn't be free to rent out its facilities for parties, but, as the director mentions, its policies will need to change, perhaps not allowing food and drink in the above galleria in addition to the appropriateness of certain parties.

Kerry Wolfe, a local programming director for Clear Channel -- the mongo entertainment corporation that owns something within eyesight and earshot at most places at most times -- called the event "a success." Looks like they might have successfully paid for the fixing of damaged artwork, with the insurance taken out for the event.

I've resisted making jokes about Milwaukee and drunken rampages, but it does seem to me that this sort of party isn't appropriate for an art museum, even one with an impressive party space such as the MAM. It's a good thing that Clear Channel's next Martinifest will be in another location next year.
Email Post