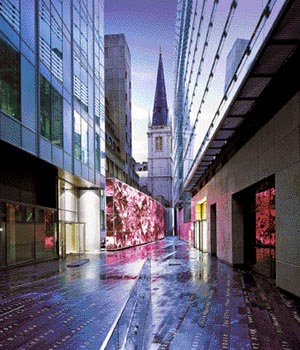 The most prominent feature in Plantation Lane is a glass art wall by Simon Patterson and Arup. The 135' (41m) by 20' (6m) wall happens at the midpoint of the street and follows the slight curve of it. An image of the moon covers the whole wall, with LED lights changing the back-illuminated wall different colors over time. The glass panels are held together with plus-sign clips; their combination lays a grid over the lunar-scape in, perhaps, a commentary on man's treatment of nature and the colonization of space.

Titled Time and Tide, Patterson's piece has been called "a breathing space, a modulation, an unexpectedly furnished respite" and is "a welcomed juxtaposition to the 'ancient' city of Wren’s church [St. Margaret Patten's Church, visible in the distance of these images]." The work's siting is important to its impact. It sits where the street narrows to perhaps a couple meters, while also visible through the lobby of Plantation South. Also, it relates directly to Wren's church, pointing to its tower beyond.

Some might say the contrast and tension between the old (St. Patten's) and new (Time and Tide) is too great, especially when LED lights are set to hot pink. The wall's integration into the larger Plantation Place development points to a greater tension in London between old and new. The city has seen some of the most advanced and contemporary buildings by the likes of Arup and Norman Foster that threaten to overwhelm the medieval fabric of London, sure to continue with the city's high-rise boom. Seen in relation to this greater struggle, this artwork suggests that even with natural and man-made change and evolution there are constants that help us keep perspective with ourselves and our surroundings. 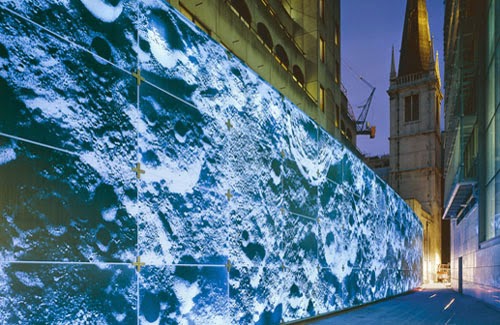 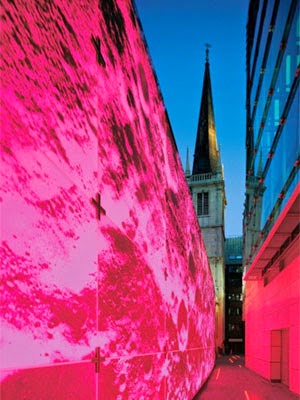 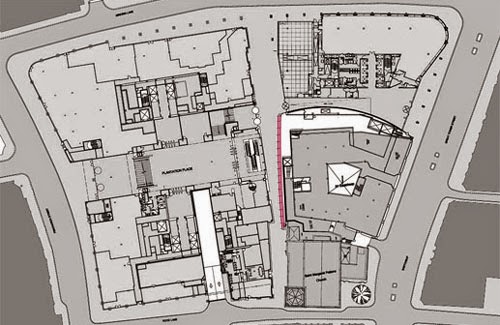