Walking past the Federal Center in the Loop over the weekend, I couldn't help but notice the vertical scaffold supports that seem to grow from Mies van der Rohe's buildings, faithful to the old rationality in their even spacing and symmetry across the facade. The image below is from a January piece by Lynn Becker where the Dirksen Building was being worked on. Today, the Klyuczynski Building is undergoing the same facade restoration, to bring back the exterior's black beauty. 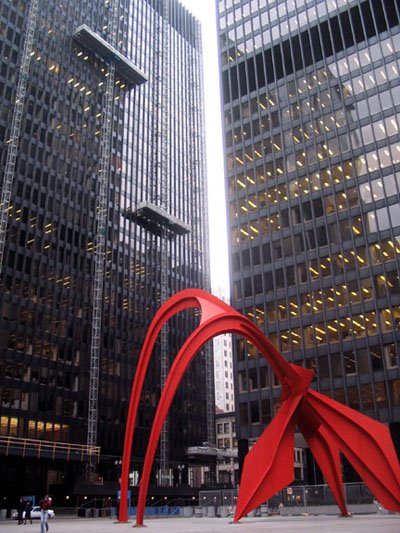 This photo above looks almost like a realization of Lewis.Tsurumaki.Lewis' early speculation, Mies-on-a-beam. That project (published in Pamphlet Architecture 21: Situation Normal), "transforms the ornamental curtain wall I-beams into wheel tracks for a pair of mobile grass platforms linked to the window washing hoist." 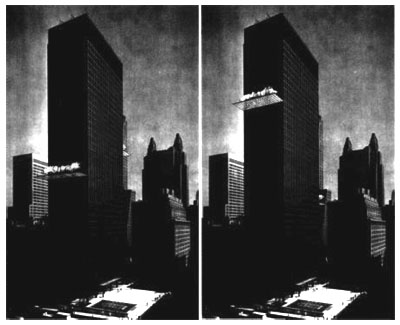 This speculation proposed to bring the ground floor plaza to all levels, acting like an executive putting green or place for a smoke break. It also creatively envisioned an actual function for the ornamental I-beams, pieces that Mies used to express the structure encased within concrete (for fire reasons) behind the facade, a lie that has not been lost on historians of Modernism. Perhaps this project, if realized, would turn the lie into a sort of truth. 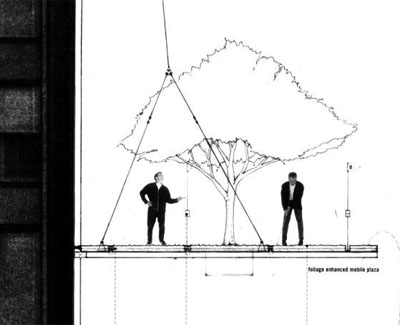 In Chicago, being that these buildings are owned and occupied by the increasingly-secretive and secure US government, a similar vertical replication of the plaza below would probably be unthinkable, but perhaps other uses could be found for this device. Unoccupied, these green platforms could become moving landscapes that give the occupants a slice of landscape for a few minutes each day. Or like Diller + Scofidio's winning proposal for Eyebeam, the platform could double as a surveillance device, giving the public a glimpse into the building's inner-workings, a public relations stunt to raise people's trust in the federal government. Or the platforms could brush water soluble paint onto the exterior as they rise and fall, creating an ever-changing striping on the building that washes off with each rain. Or maybe ...
Email Post