As briefly mentioned last week, I felt the need to make a trip over the weekend to James Turrell's new skyspace at the corner of Halsted and Roosevelt, in order to experience it for myself before making any further judgment on it success.

After spending a little bit of time there, I find myself in agreement with Edward, who said that the water "does not 'drown out' the noise and chaos enough." This can be attributed to the fact that four equally-spaced openings allow access to the interior, leaving roughly half of the enclosure to be "filled" by the falling water. Furthermore, the water falls in thin streams, rather than sheets, so any visual obstruction is minimal. In terms of noise, Hugh Pearman makes the observation that the Yorkshire skyspace "appears to capture the background noises of the park." The same is true here, where the sounds of traffic are actually intensified by the raised walls. 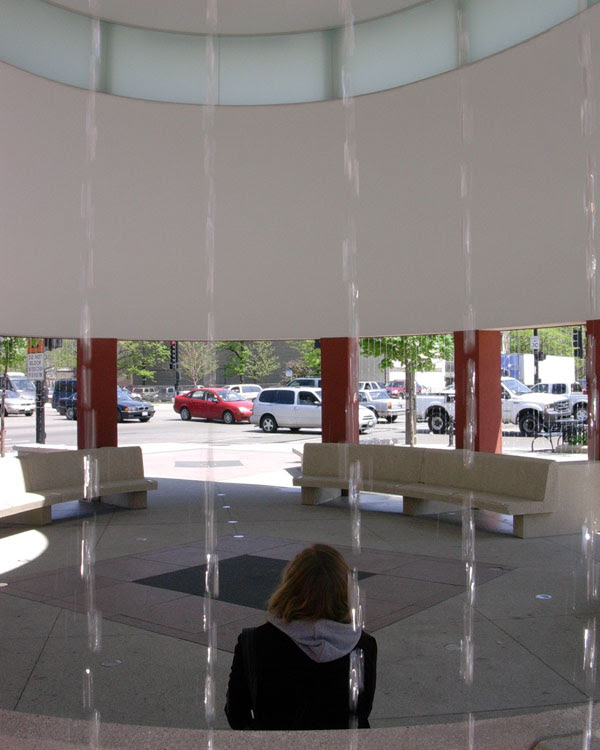 So after my visit, I find myself in agreement with my initial thoughts on the skyspace's lack of success, though as an urban plaza it's very successful. The aforementioned openings in the enclosure not only provide access to the skyspace and its benches, but also access through the skyspace, allowing people to cross through it rather than having to walk around it. Additionally, the skyspace is a small piece in the overall plaza, which also contains a water feature and additional seating. The degrees of success for the plaza and skyspace were most visible in the throngs of people Sunday afternoon using the benches and other areas of the plaza, and the complete lack of anybody sitting inside the skyspace itself. The plethora of floor-mounted LED lights all over the place indicates that the plaza's heavy use should extend to the evening and nighttime hours, perhaps a time when Turrell's skyspace is most dramatic.

If the design of this plaza were devoted to the skyspace, it might look like the image above. Given the other factors influencing the design, though, it ended up looking like this. Ultimately, it's not a bad compromise as it improves its corner of the city in numerous ways.
Email Post