Over at Design Observer, Justin Good waxes philosophical about beauty and the Aesthetics of Wind Farms, while over at Subtopia, Bryan Finoki draws our attention to the United States Capitol Bunker Visitors Center now under construction. Seemingly opposites -- the former above ground the latter below, one an object the other a space, the first in nature the second in a city, etc. -- these physical constructions embody two of the biggest issues today: energy and terrorism, respectively. 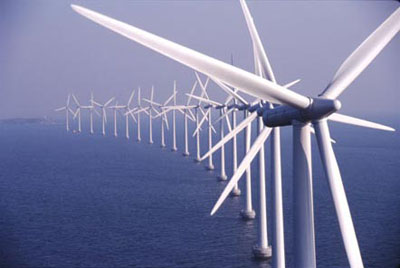 As Dr. Good argues for the objective beauty of wind turbines and wind farms, he links to an article on the battle over a proposed wind farm off Cape Cod, Massachusetts. Cape Wind's website contends that, "Miles from the nearest shore, Cape Wind will use the clean, inexhaustible power of wind to provide three-quarters of the Cape and Islands' electricity." The main issues delaying or potentially killing the plan are environmental, like impacting bird migratory routes, and cultural, particularly affecting beachgoers ocean views.

To me, part of the problem is that these residents affected by the wind farm are so rich that they will be able to deal more easily with the soaring energy costs that will afflict everybody in the coming years. But they're potentially squashing a project that could, if successful, be an incubator for other similar projects all over the country that could help people beyond New England.

Ironically, environmentalists are pitted against each other as they try to determine if the farm would have adverse effects on birds. All the usual activists are there, but on both sides of the fence: "On the anti-wind-farm side, you have the Humane Society, Massachusetts Audubon Society, the International Fund for Animal Welfare, and the International Wildlife Coalition; on the pro-side, Greenpeace, the Union of Concerned Scientists, and the Conservation Law Foundation."

This wind farm would go a long way to reducing carbon emissions, so I'd rather see the project go ahead than not. Of course, global warming could potentially affect birds as well as humans (and lots and lots of other species), so if we take global warming seriously it points towards a decision that would have the most longterm impact. 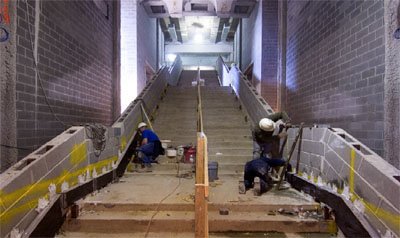 Further down the coast, "the Capitol building in Washington is getting a 500 million dollar bunker installed at the foot of it's front entrance." I'm amazed that I haven't heard of this project before today, something that's been in the works since 1991. But at the same time, I'm sure that's no accident.

While the official website says the Visitors Center will "provide visitors shelter from the unpredictable D.C. weather," others believe, "ItÂ’s not being done for the visitors. ItÂ’s being done for the members," to shelter them from a terrorist attack.

Terrorism is one of those issues that is more emotional than intellectual for me, so I try not to say much about it here. Bryan does a good job summing things up on his page, quoting from "Survival City", but I would add that the deeper and stronger we build, the further we are from addressing the reality of terrorism, of why it's a problem and why we're a target.

Update 05.26: Just found this well-timed post over at Google Earth Blog, where somebody has modeled the Cape Wind Project and set up views from the shore to see the impact of the project. This sort of thing could be a great tool to getting the project approved as the impact doesn't appear to be nearly as bad as they think.
Email Post