Following up on its Bike 2000 Plan, the City of Chicago has released its Bike 2015 Plan. 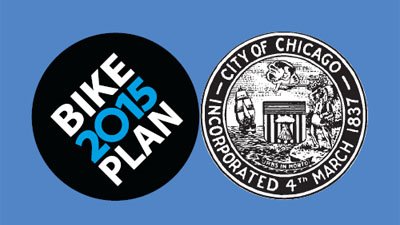 According to the 56-page document (4mb PDF link):

The Bike 2015 Plan has two overall goals:
:: To increase bicycle use, so that 5 percent of all trips less than five miles are by bicycle.
:: To reduce the number of bicycle injuries by 50 percent from current levels.

The plan has eight chapters, each with a specific goal:
:: Bikeway Network -– Establish a bikeway network that serves all Chicago residents and neighborhoods.
:: Bicycle-friendly Streets -– Make all of ChicagoÂ’s streets safe and convenient for bicycling.
:: Bike Parking -– Provide convenient and secure short-term and long-term bike parking throughout Chicago.
:: Transit -– Provide convenient connections between bicycling and public transit.
:: Education -– Educate bicyclists, motorists, and the general public about bicycle safety and the benefits of bicycling.
:: Marketing and Health Promotion -– Increase bicycle use through targeted marketing and health promotion.
:: Law Enforcement and Crash Analysis -– Increase bicyclist safety through effective law enforcement and detailed crash analysis.
:: Bicycle Messengers -– Expand the use of bicycle messengers; improve their workplace safety and public image.

If you like numbered lists then you'll love the above document (best read in html as that version provides many links on what the city calls "Best Practices", meaning other places providing for bikes better than Chicago). Me, I couldn't make it through the thing if I tried. But I did read the below table, and it helped temper my initial excitement at hearing about the plan and its far-reaching goals. 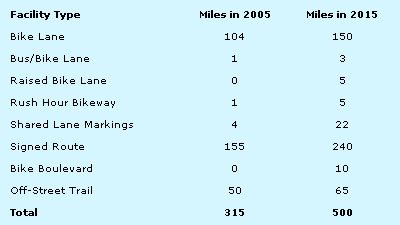 Comparing the current state of things on the left with the 10-year plan on the right, those totals look good (185 miles) but the gains appear to fall primarily into two categories: Bike Lanes (46 miles) and Signed Routes (85 miles).

Bike Lanes are "five or six-foot wide corridors for the exclusive use of cyclists" and are located between parked and moving cars. A lot of drivers don't respect the lane and double-park their cars, forcing bikers into moving traffic. Furthermore, bikers have to be extremely careful of people opening drivers-side doors into the lane.

Signed Routes don't have dedicated bike lanes, but are merely connections between streets with actual bike lanes. They direct bikers to nearby lanes but aren't any safer, since many times they are too narrow for bike lanes.

So approximately 70% of the new Miles in 2015 will be the extension of already risky and dangerous conditions. That might explain why about four or five (depending on how you look at it) of the eight chapters of the plan address the second goal of bike safety. So the City's saying, "since we can't layout and design safe routes, let's just figure it out some other, cheaper way." Regardless, I'm looking forward to those Raised Bike Lanes and Bike Boulevards.
Email Post