It was quite a shock to see Mini Cooper partnered with Arcosanti in an insert advertisement in this month's Dwell Magazine. 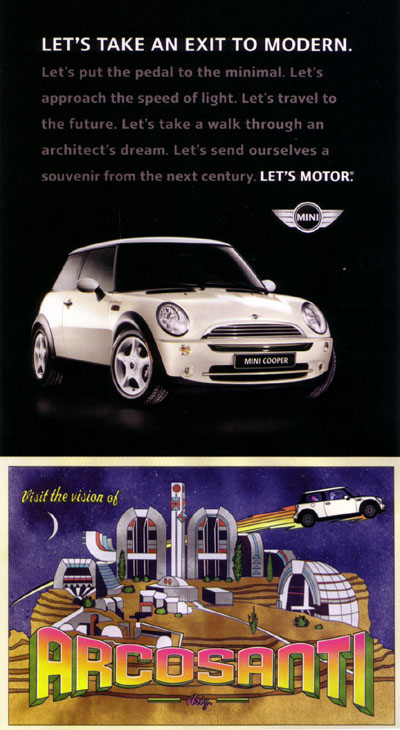 Part of Mini's "Let's visit five wonders of the modern world" campaign (the other four being The Chinati Foundation in Marfa, Texas; Santiago Calatrava bridge in Redding, California; The Farnsworth House by Mies van der Rohe in Plano, Illinois; and Frank Lloyd Wright's Fallingwater in Mill Run, Pennsylvania), the back of the ad asserts that the Mini uses the same design principles as Soleri and Arcosanti, specifically conservation of space and fuel. While it may be true that the Mini is designed with these considerations in mind, it's a far cry from the way those concepts work and inform Arcosanti (see an article I wrote for TENbyTEN for background on the place). Same words, different principles.

What I find hard to believe is that Paolo Soleri would endorse such a thing as an automobile, even though he located his pedestrian-only laboratory of Arcosanti in an area only reachable by car, a fact not lost on Mini who mention that "those desert highways along the way are a veritable motoring paradise."

So Mini appears to be twisting the main concepts of Arcosanti towards its end. It makes me wonder how the other four relate to Mini Cooper...
Email Post