The May/June issue of the Boston Society of Architects/AIA's ArchitectureBoston publication revolves around the theme UGLY. One of the highlights includes a roundtable discussion, "Pretty Ugly" (PDF link). 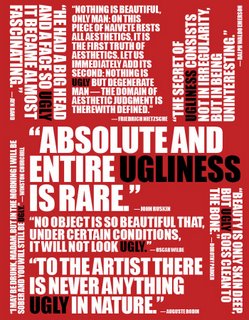 As their web page indicates, "Unlike many other architecture publications, we are an 'ideas' magazine rather than a 'picture book.' Our stories connect architecture to social, cultural, political, and economic trends. Provocative and passionate, always clear and sometimes witty..."

Now for my rant.

This is news to me, and I gotta say that the more I see AIA chapter publications -- first New York's and now Boston's (humorously each chapter bills itself as the largest AIA chapter) -- the more I realize that Chicago's chapter newsletter (Focus) is but a fraction of what it could and should be.

Where the East Coast rags are magazine quality (color) with numerous features (not just one in each issue) and a willingness to push the local architectural community via things like the roundtable above, our Midwestern monthly lacks the focus that its name purports. It's got member news (a lot), a calendar (out of date by the time it arrives in the mail), a cover feature, and lots of ads, but this falls way short of truly representing the city's architectural community as well as being what one would expect in the city's current, promising architectural climate.

Now I'm not saying that glossy, sexy pictures jazzing up its pages will save the day, but color does help to represent the architecture that members produce. Funny thing is that there's color in the publication now (red) but it's in the graphic design, not the architecture where it should be.

It also helps to have multiple voices in each newsletter, meaning multiple features in each issue. I like the features most of the time, but it would be great to have more of them. And not to talk too much about the Pretty Ugly roundtable, but this sort of thing also suggests a wider net of participation beyond the editors and few contributors to each issue. It's an extension of the magazine beyond its pages and into the architectural community, if not the public as well.

AIA Chicago's Focus could start by featuring transcripts of discussions at the Graham Foundation (who had three last season), the CAF, the CWA, as well as their own, and then in the future have the magazine actually be an impetus for more discussions to be featured in its pages. Chicago is blessed with numerous, strong architectural organizations and schools that rarely, if ever, seem to communicate. Witness the overlapping lectures that happen especially during the school year. Sure, nobody wants to go to a lecture on a Friday or Saturday, thereby limiting the number of days per week actually used for events, but why must four good lectures fall on the same night?

It sounds like what I'm really ranting about here is (lack of) interconnectedness of the various participants in the local architectural community, particularly AIA Chicago. Not to say they're not doing a good job, because they are. They could just be doing a much better job that would help them in their goal of being the profession's voice and strongest link to the public. The Genesis competition and its goal of "creating a space that is more accessible and visible to the public in order to strengthen our connection with the community" is definitely a start. Now how 'bout focusing on Focus?
Email Post