What's In a Name?

When it came time for Martha Stewart to name the newest magazine in her ever-growing, post-prison empire, a magazine to fit alongside such titles as Martha Stewart Living, Everyday Food, and Body+Soul, what did she choose? Well, Blueprint of course! 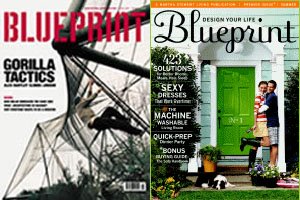 What, that sounds familiar? Well, it should. It's also the name of the 20-year old British publication (left in the image above) that bills itself as "the international authority on contemporary architecture, design, and culture."

Does this mean that Martha is aiming to supplant that old rag as THE authority on those subjects? Probably not, as the subtitle of Martha's magazine is "Design your life," indicating that it's yet another in that fast-growing segment of weeklies and monthlies: lifestyle magazines. A search at magazines.com yields 175 titles in this broad category with, naturally, Oprah's self-titled one the most popular. Perhaps Martha has her sites on this other female-run empire and not some narrowly-focused, oversized magazine from across the pond.

Martha's Blueprint says to me what most architects have always known: that design permeates our lives in pratically every aspect of it, from where we live and work to the cars we drive, the products we buy and use, the toilets we sit on, the clothes we wear. I've always found Metropolis Magazine to be the most overt illustration of this fact, but in an intellectual and critical, rather than consumer-driven, way. Most of the time we "design our lives" not literally but by choosing what to buy, so that our clothes, our houses, our cars are an extension of us. It looks like Blueprint will be another magazine towards this end, with page after page after page of suggestions for what to buy in the guise of creating a new and unique you.
Email Post