A couple projects at opposite ends of the size and scale spectrum are getting quite a bit of attention these days. So here's more.

The big one is Kanyon, a massive mixed-use project (179 luxury residences, 26 stories of offices and nearly 40,000 square meters (430,000 sf) of commercial space, according to Cool Hunting) in Instanbul by Jon Jerde, the go-to guy for huge, money-making, shopping-oriented developments. In plan, the development recalls other projects by Jerde -- specifically Canal City in Fukuoka, Japan -- where a pedestrian-only, curving spine focuses traffic and activities.

In Istanbul, Jerde "leaps directly into space-station fantasy urbanism," as described by Tropolism, although similar was probably said about Canal City when it opened in 1996. A lot of the attention given to Kanyon must be spurred by the image below, an angle that makes the complex resemble the Death Star. 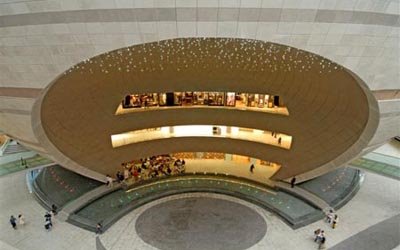 Like that Star Wars satellite, this section of Kanyon is an intensifier. Where the former intensifies energy to create a destructive weapon, Kanyon's space intensifies the activity of the pedestrian spine, in a manner similar to Canal City.

At the other end of the spectrum is Frank Gehry's Delicious Cafe, a tiny lunch counter appended to The Gehry Building, shared most notably by Gehry Partners and advertising agency TBWA\Chiat\Day.

Even though Gehry played a large part in the cafe coming about, its design does not exhibit any of the architect's signature flourish which people have come to expect and appreciate. It's a restrained design whose signage is the most prominent element (cleverly split into deli and icious). 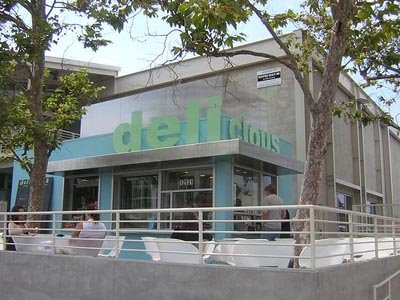 The DailyOlive gives a write-up of its design as well as the food, also including a Flickr set for "his smallest project." 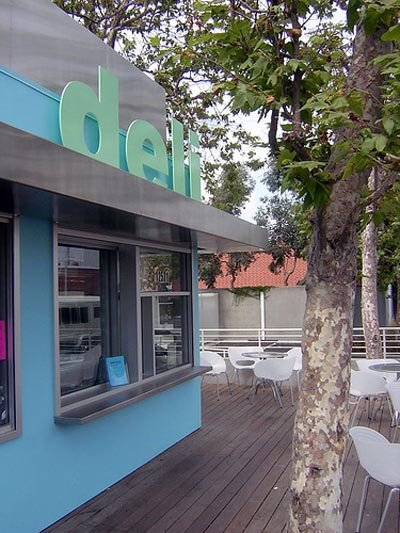 It's kinda refreshing to see Gehry let function and space (in this case outdoor) take precedence over wanky form. In this case, this decision might have arisen from Gehry acting as something as a client (I don't know the specifics, but what I've read points in that direction) and therefore having to deal with a budget. A $250,000 lunch counter would probably have been out of the question.
Email Post