Archinect points to a New York Times article on an exhibition of "Giant Depression-Era Pools That Cool New York" at Central Park's Arsenal. These pools are the product of Robert Moses' urban planning concepts, as well as his background as a competition swimmer. Of the eleven Olympic-size pools featured in the exhibition, supposedly Astoria Pool was his favorite, as "It has been said that Moses intended it to be the grandest of the new pools because it had the best view of the Triborough Bridge, which was completed in the same year." 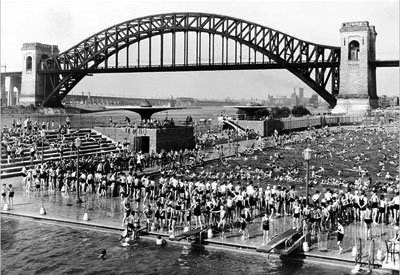 The slide show accompanying the Times article shows the above view of Astoria Pool, as well as other vintage and contemporary images from it and other pools. The biggest change between the then and now conditions is the growth of the landscape, somewhat helping to temper the enormous size of the pools, built in keeping with the enormous size and grand thinking of the bridges and other public works at the time. 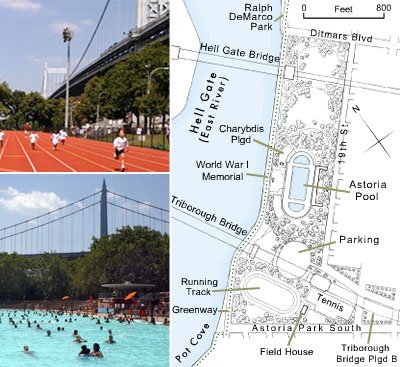 The City has numerous pages on Astoria Park, including its Park of the Month feature from last summer, a Partnerships for Parks tour, and panoramas.
Email Post