The film tells the story of Brian Sweeney Fitzgerald (called Fitzcarraldo by the locals), an eccentric foreigner in the jungles of early 20th-century Peru determined to bring opera to the frontier town (as he calls it) where he lives. To raise money for the construction of an opera house he sets out to extract rubber from trees in an inaccessible part of the jungle. Rather than battling rapids upstream, his plans involves "coming from the rear" by carrying a steamship over land from one river to another where they almost meet. But the land between the two rivers is extremely steep and requires strength, ingenuity, and time to traverse. Fitzcarraldo is aided by a tribe of indigenous peoples that have other motives for the seemingly impossible feat. 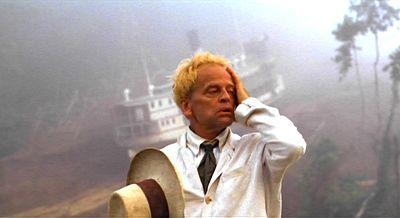 Although I hadn't heard of the film before last nite's screening, apparently it is very well known, not so much for its story but for its production history, extreme shooting conditions, and off-screen friction. (A documentary on the making of the movie was even made, called Burden of Dreams.) Apparently, Herzog was almost halfway through filming when Jason Robards -- his first choice for Fitzcarraldo -- became ill and had to leave the film. It was about a year from the start of shooting when they resumed with Klaus Kinski, a familiar Herzog face who clashed numerous times with the director and the locals during filming. While watching the film, this tension isn't apparent (maybe some frustration, the frustration of filming in the Amazon, is), but the realism of moving the ship over land and the subsequent journey down the rapids clearly indicates minimal special effects. It looks like they are actually moving the steamship up and over the hill via winches and sheer force. And from all accounts I've read, that is the case. 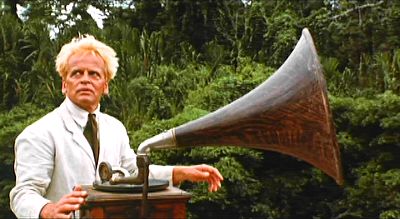 To me the importance and popularity of the film's making, as much as (or over) the film itself, points to a parallel between the character of Fitzcarraldo and the director himself. Herzog could have quit production in the Amazon entirely after Robards left, but he persevered, much like Fitz never gives up in failed attempt after failed attempt at raising money for his beloved opera house. By the end of the film it seems that fate has told Fitz that his dream will never come true, but even then he finds a way to make the most of an adverse and defeating situation.
Email Post