This afternoon we were treated to a lecture on Budapest, Hungary's House of Terror, "illustrating the grim decades of Nazi and Communist repression." Architecturally, the museum is basically a renovation of a much-renovated former headquarters for both the Nazi and Communist secret police, but the exhibition installations seem to overshadow the interiors. The exterior is another story. 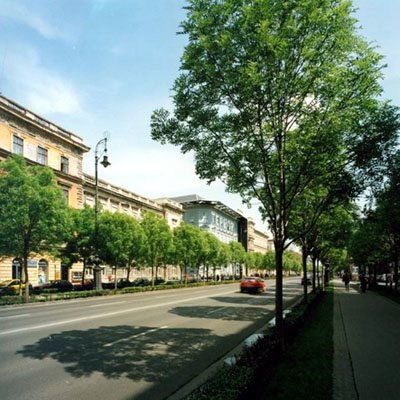 The existing building is painted a muted grey that stands out from its neighbors and supposedly recalls the outfits of the secret police. 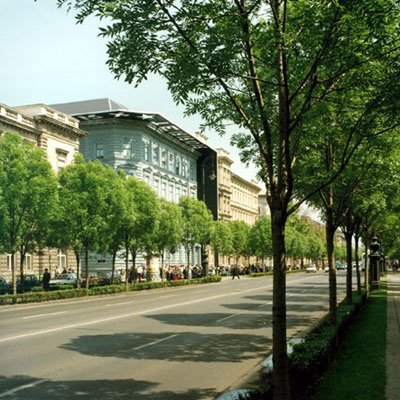 Wrapping the building's cornice is a new projecting "blade" with backward letters and figures cut out; the blade continues down the side of the building to sidewalk level. 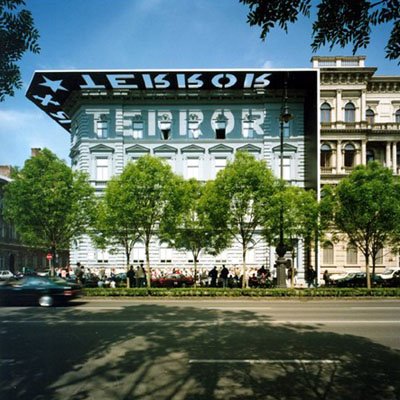 During the daytime hours the reverse letters spell out TERROR in the shadow case from the new projection. The blade intervention is strengthened at pedestrian level as visitors are forced to walk through it on the way to the entry.

What at first glance appears to be a silly PoMo device, seems to have a greater appeal over time. Both the font and figures recall Nazi and Soviet era displays, though the cut-out is like an inversion (backward=forward, dark=light) of those principles towards something of more humanitarian ends.
Email Post