A rumor I heard yesterday about Adrian Smith leaving SOM is corroborated today by Blair Kamin in the Chicago Tribune. While Edward states that Smith's "taking about 50 people with him," this bit of information is not part of Kamin's piece. Regardless, it wouldn't surprise me if that were the case, as even at a corporate office with high salaries and good benefits, the camaraderie and allegiance to personalities can run high.

The Tribune article makes the decision stem from a mandatory retirement that SOM would have enforced in about three years. The 62-year old Smith sees another 10-15 years worth of work in him, something not unheard of with architects. Frank Lloyd Wright worked practically until the day he died at the age of 91, Frank Gehry is 77 years old and shows no sign of slowing down just yet. 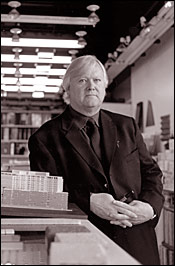 Also in the rumor mill is news on the oft-reported Aqua tower by Studio Gang, a mixed-use high-rise that's becoming the signature building of the Lakeshore East development in Chicago. According to a tipster who will remain anonymous here, with its latest submission to the building department, "the design appears to have been value engineered...[the] dramatic cantilevered balcony's projecting 12' or more from the body of the building...have been reduced to 5' or less." Also, "the curved edges [now] die into the corners of the building," where before they wrapped the corners, making the building appear less box-like.

I have not corroborated this rumor with the architect or the City of Chicago, though a progression of this sort is not uncommon in this, or any type, of building design. And the fact that Studio Gang is a design consultant on Aqua and Loewenberg Architects -- a firm notorious for throwing up cheap and ugly buildings -- is the architect of record makes this progression all the more understandable. Regardless, let's hope that this rumor turns out to be false.
Email Post