Crain's Chicago Business has an article on quirky behavior in the office. And who should be featured but my old boss! 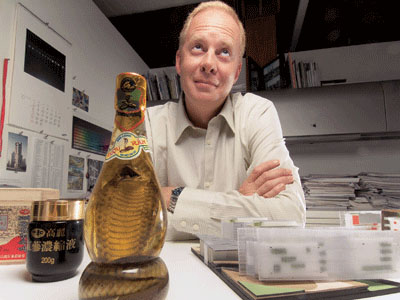 "Scott Sarver, principal at DeStefano & Partners Ltd., has a jar containing a coiled-up snake on his desk. He says it keeps him feeling creative, but it also gives visitors pause: 'Their eyes wander, and they stop talking.'"

Also Matt Snoap, who sat behind me for a while at work, is quoted in the article as saying, "Scott can be an intimidating guy at times...it doesn't ease your tensions."

I must admit that I don't recall being distracted by the cobra, though I don't think Scott typically had the jar as prominently displayed on his desk as in the above photo...though it might just have to stay there after its appearance in Crain's.
Email Post