Roosevelt Island is a two-mile long by 600-foot wide island in the East River between Midtown Manhattan and Long Island City. It was formerly known as Welfare Island; before that it was Blackwell's Island and has also been called "Instant City" and "New Town in Town", the last the semi-official name by the State's Urban Development Corporation as they underwent plans to develop the island in the early 1970s. The early masterplan by Philip Johnson and John Burgee has been partially executed over the years, the biggest changes being a reduction of the population of the island by half and a doubling of the size of the residential buildings from ten to twenty stories. These changes came about mainly by the UDC's malleable vision and fiscal collapse. 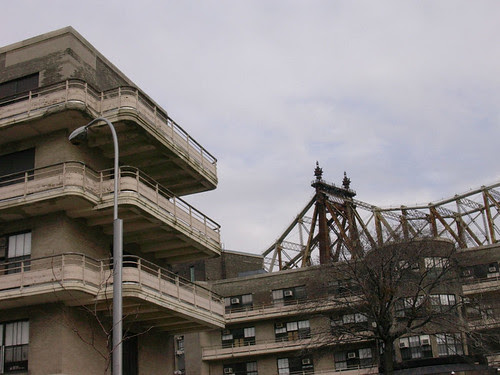 South of the tramway and the Queensborough Bridge lies the Coler-Goldwater Hospital, dating from 1939 when it was born as the Welfare Hospital of Chronic Diseases. A series of chevron-shaped buildings extend north-south along this end of the island. Their terraces in the image above indicate a consideration for long-term patients' connection to their surroundings, though their shape indicates a lack of upkeep. Access to a couple splendid ruins at the southern tip is restricted by a flimsy yet imposing wall. 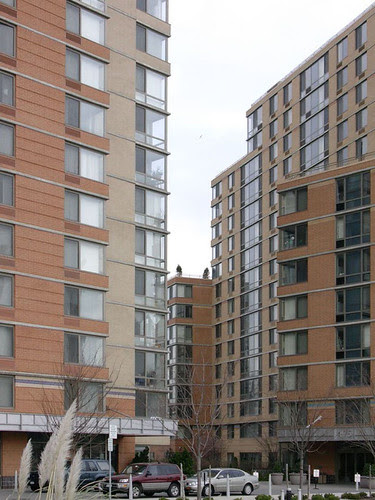 North of the tramway is the Main Street and the residential portion of the island's development. Between the tramway and Main Street, though, are newer residential high-rises (above) that try to set themselves apart from the existing residential buildings with a little color. Other differences include flat exterior walls and repetitive windows from floor to floor. Otherwise, it's basically the same recipe as Main Street, unfortunatly minus the retail. Looking at the image above, these could be in Chicago, Seattle, just about anywhere. 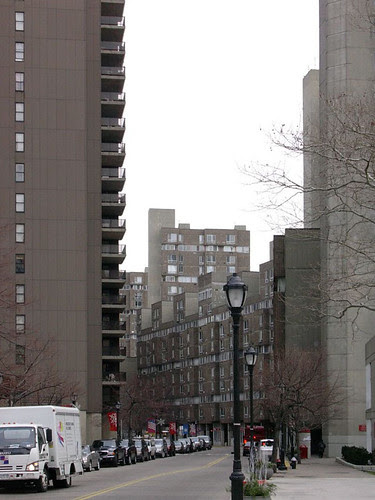 On the other hand, Main Street feels like someplace (to me it feels like Britain, though that's besides the point). The street makes a couple bends along its short length, giving interest to one's movement along the spine and giving the undulating facades some frontal views. Even though the buildings are gray and somber (a perfect setting for 2005's Dark Water), they make for a very interesting community. Sure, I wouldn't want to live there, but the fact that people do - and are able to support the little bit of retail in the glassed-in arcades - makes a difference. A walk through town is less an investigation of a failed experiment or urban ruin but rather a view into a different way of living. 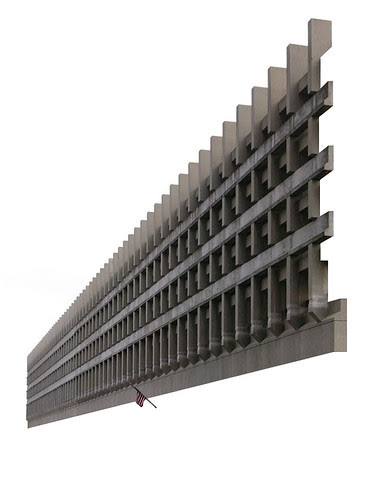 Above is the facade of the parking garage near the northern end of Main Street. Beyond is the Octagon, the lighthouse, and more buildings, though my excursion stopped at this garage. More photos of Roosevelt Island can be found in my Flickr set.

Directions:
The island can be reached by the F train, though the recommended approach is via the scenic Roosevelt Island tram from 59th Street and Second Avenue in Midtown.