About a year and a half ago I posted about a horseshoe-shaped, glass-bottom walkway that would jut into the Grand Canyon, sitting nearly a mile above the Colorado River. It was optimistically planned to open on the first day of 2006, but that obviously did not happen. An LA Times article, though, indicates that construction is underway on the Grand Canyon Skywalk, and it is set to open soon. 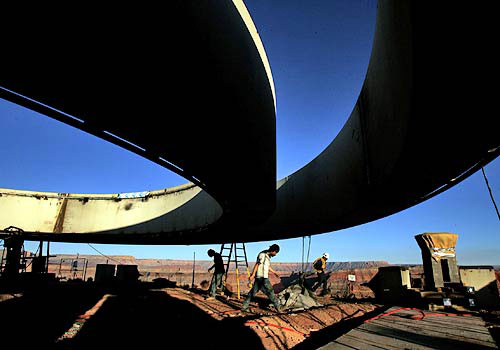 The article also indicates that the Skywalk "will be the catalyst for a 9,000-acre development [on the Hualapai Indian Reservation], known as Grand Canyon West, that will open up a long-inaccessible 100-mile stretch of countryside along the canyon's South Rim. [The development] may eventually include hotels, restaurants and a golf course." 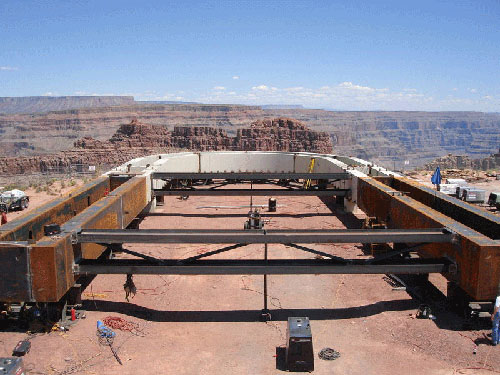 The Hualapai are using the Skywalk and future developments as a means to address social problems within the group, including poverty and alcoholism. People outside the tribe are arguing that the plans will deface the Grand Canyon and turn it into a "tacky commercial playground." These appear to be the two sides of the argument, though the former is the one grounded in law, as the tribe owns the land and any rights to develop it. The latter could perhaps try to steer people away from visiting the Skywalk and paying its $25 admission, towards more sustainable ways of enjoying the canyon.

To me the Skywalk in and of itself is not a bad thing (or not as bad as the rest). It's quite an engineering feat and surely gimmicky, but without the development it's not as harmful to its context; road access, a place to eat, a gift shop, some toilets. But the irony is that Skywalk cannot exist alone. It's a piece meant to generate the other parts of the development. The Skywalk is meant to bring people to a side of the canyon more remote than the usual tourist spots, while the rest of the development is meant to keep them there much longer. It's unfortunate that the Skywalk will be linked to a golf course and other "non-native" amenities, but at this point it's well on its way to fruition.