I've never been a fan of the Friedensreich Hundertwasser's buildings. They're a bit too goofy and definitely the product of a painter rather than an architect (which in itself isn't a problem, but the surface treatment of the exteriors I think stems from this). His most well-known building is easily the eponymous apartment complex in Vienna he "completed" in 1986; I put quotes around completed because his buildings are never really finished. They evolve over time not only via the growth of trees and other vegetation integral with his buildings but by the occupants as well, who are allowed to paint the wall outside their unit in the Hundertwasser Haus, for example. This "strident philosophy of ecology and personal freedom," said about the late artist in a New York Times article yesterday on a posthumous winery opening in California, is something I definitely appreciate, though the execution still troubles me. 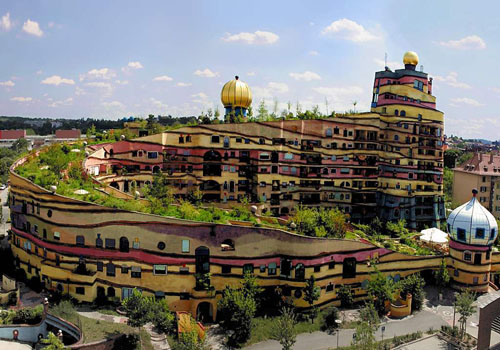 In a slide show accompanying the Times article, I was struck by the Waldspirale development in Darmstadt, Germany, shown above and below. While the striped exterior and onion domes leave much to be desired aesthetically, the ramping green roof is just amazing. It extends the green courtyard across the whole development, giving residents easy access to this area. It also helps the project relate to its context, by giving the mass a low scale inside the block but giving the public face a larger, more appropriate scale on the adjacent streets. 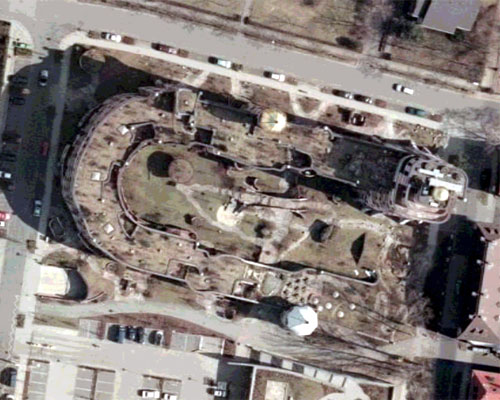 This is the kind of architecture that is in vogue now (witness Aaron Betsky's book Landscrapers from 2002), though in a more tame and less artistic manner. It's an appropriate strategy for a world that needs to get a lot greener.
Email Post