Yesterday I made it to MoMA to see the Richard Serra Retrospective, on display in the courtyard and two interior galleries until September 10.

Two large-scale pieces are located in the courtyard, one of them being Intersection II, from 1992/3. Four identical conical sections are placed in a roughly mirrored, symmetrical composition, creating a central space and two curving paths on either side. It's a great piece to walk through, as well as to watch how people move through and react to the massive cor-ten steel sections. 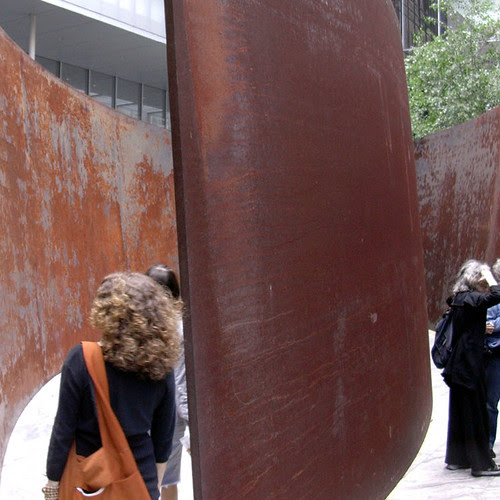 The steel, although weatherproof, has a flakiness along much of the lengths that rewards close inspection. 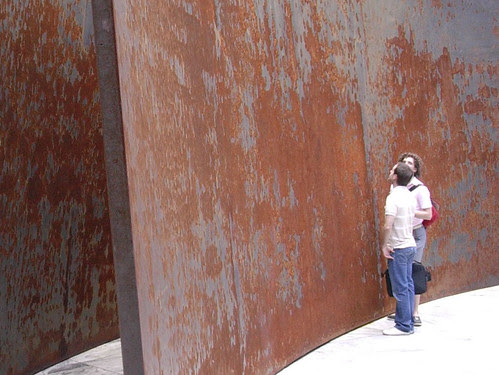 Intersection II's siting in the courtyard appears to relate itself to the other exterior Serra, 1998's Torqued Ellipse IV, as its "axis" points to the latter. 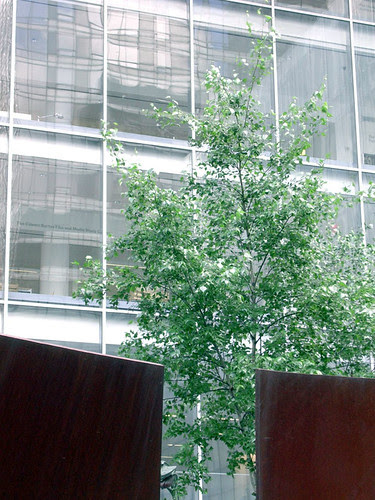 Torqued Ellipse IV is a continuous tilting plane with a small gap for access to the interior space. Even though Serra points the first of his pieces towards this second one, the visitor must walk around it to reach the interior, making he or she experience the changing perspective of the steel's tilt. 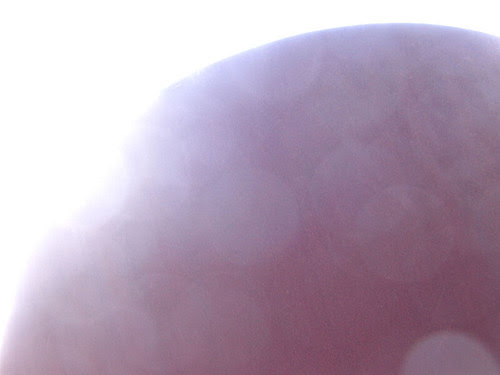 While the two pieces outside are what Serra's become known for, the three new pieces in the second floor galleries take his sculpture to another level, experientially. My favorite, Sequence (pictured below from MoMA's web page, as photography is not allowed in these galleries), is comprised of two continuous bands that interlock to create a sort of "S" from overhead, though as I moved along the winding path it was close to impossible to picture it in plan; or, as described in the exhibition literature: "This work engages with memory -- with the inevitable inability of the viewer to construct any distinct memory of these almost indistinguishable and every-changing spaces."

Thinking back to the experience of the pieces in the courtyard and in the second floor gallery (the sixth floor gallery is mainly older work I won't deal with here), I wonder what made the interior experiences so much more impressive than the courtyard ones for me, in addition to the complexity of the spaces created by the ever-present tilting cor-ten planes. I've concluded that the gallery space itself has a lot to do with it. The courtyard context not only distracts from, or competes with the pure experience of Serra's sculptures, it is also on a scale much greater than the spaces he created. Inside, the space containing the sculptures is only slightly larger (making one wonder how the pieces were installed) so the experience of the sculptures' spaces is that much more "pure." As well, the white walls and ceilings are a great contrast to the rusted steel.