The cover story of yesterday's free rag AM New York was about a "McMansion" under construction in the historic Broadway-Flushing/Murray Hill neighborhood of Queens. The short article pitted neighbors versus John Hsu, whose "dream house" is in the midst of construction, with photos accompanying the article showing a two-story, concrete frame next to its traditional neighbors. Correct me if I'm wrong, but I always thought McMansions were more like this than what the article is portraying. 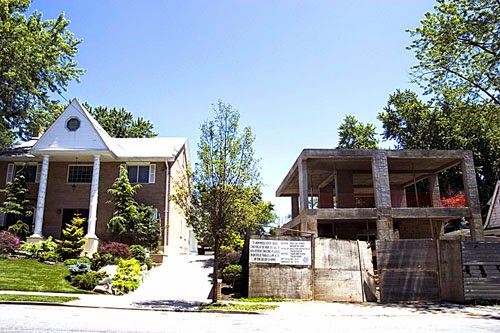 This looseness with wording makes me wonder just what is being attacked and why. Hsu's house appears to be within the scale of his neighbors, though his house looks to be closer to the sidewalk, making it appear bigger. So is this more an attack on a "McModern" design than a McMansion? Perhaps this is an attack on the general idea of non-contextual architecture, as the article indicates that preservationists are pushing for the neighborhood to gain landmark status, something that would severely restrict what people could build. 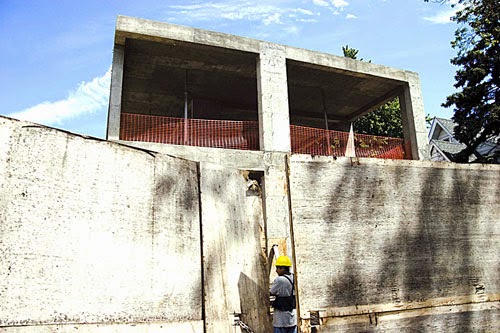 The article further mentions that Hsu's plans were approved by the Department of Buildings, so his house will most likely be completed as planned. I'm curious to see what the final design entails, but it is nowhere to be found or seen in the article, and this omission also makes me wonder if the neighbors are more upset by the Modernist idiom of the concrete frame than what will eventually cover it.
Email Post