Back in April 2006 I posted a panorama of a small area in Chicago's Streeterville neighborhood undergoing a bit of a high rise building binge. About a year and a half later -- while in town on a vacation over Thanksgiving -- the shifting skyline was starting to take shape, with cranes giving way to glassy exterior walls and approximately 1,000 residential units.

To reiterate from the earlier post, the five new condo towers include (from E-W; L-R in the large photo): 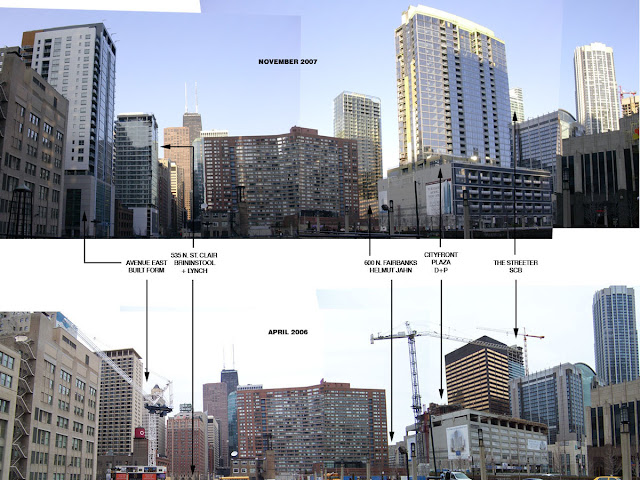 This view from the raised plaza adjacent to NBC Tower will be further crowded by the coming phases of Cityfront Plaza, which will finally steal the sunlight and views the Grand Ohio condos have been blessed with all these years. And interestingly, even though the Cor-Ten and gold-tinted glass Time-Life Building is out of direct sight in the view, it is apparent as a reflection in Jahn's curtain wall, with especially strong reflections from the gold windows on its base.

Who'd ever think so much development and money would be centered on land named after a founding "squatter"?
Email Post