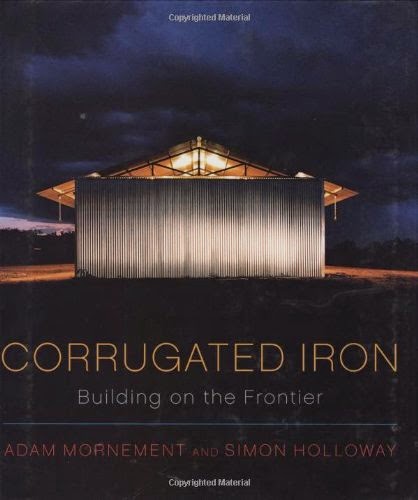 When one hears the term corrugated iron (or the more contemporary corrugated metal or corrugated aluminum) a few conflicting images pop to mind: large industrial buildings, third-world shanty towns, Quonset huts, and the houses of Glenn Murcutt. Ranging from small to large, quick to labored, amateur to professional, and embracing other apparent opposites, the authors in this history/contemporary presentation of the material determine that what these applications have in common is the frontier. Since its invention in the early 19th century, and its use in London's docks and train stations, the material has always found itself on the margins, seen by people then and now as lacking dignity, expressing poverty, and looking just plain ugly. While this book presents a number of contemporary beauties by the likes of Murcutt, it does not try to convince the reader of corrugated iron's merits. Rather the book traces the material's somewhat troubled history and outlines ways in which it can continue to be used in architecture and other building.

The heavily-illustrated, large-format book chronologically presents the story of corrugated iron from its 1829 patent, through its boom after the original patent expired, its varied application on America's so-called frontier, its wartime use, to informal settlements and contemporary architecture. Each chapter focusing on one of these themes presents "case studies" alongside the historical text, giving the book an alternative read for those not interested in a thorough history of the material.

For this reviewer, the two most interesting parts of the book are the last two: corrugated iron's use in informal communities and in contemporary architecture. These two polarities of the contemporary condition -- one out of necessity, one out of alternative expression or budget-consciousness -- are certainly two different types of frontiers, with the acceptance of the latter not being shared by one of the former...though it depends who you talk to. The apparently ugly or destitute nature of shantytowns is a view shared by those who are closer to living in a Glenn Murcutt house than living in the slums of Brazil or Nigeria, a similar alignment of corrugated iron's critics in the 19th century. Has anything been learned in the last 175 years? Has the intelligent use of the material in disaster housing and even museums altered the course of thought towards corrugated iron? The contemporary examples here show an unabated use of the material in a variety of ways, embodying one aspect of the frontier that silences those critics: a lack of concern in what others think.