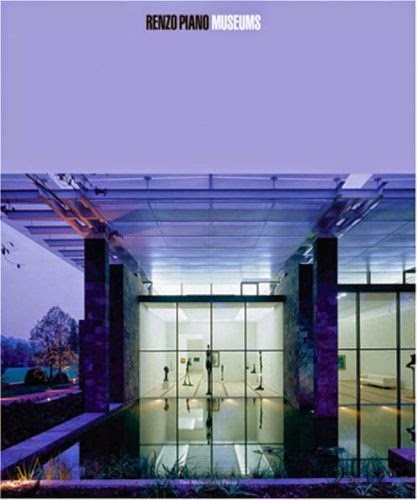 In a piece in Bloomberg News last month, critic James S. Russell laments Italian architect Renzo Piano's dominance of museum commissions in the United States. Citing timid museum trustees and an embrace of "architecture serving art" as reasons for this phenomenon, over the quality of Piano's output, which he sees as lacking in recent projects like the Morgan Library and LACMA, Piano nevertheless has a number of museum designs for the US either on the boards or underway. While I would agree that some of his recent designs do lack the clarity or quality of the Menil Collection or the Nasher Sculpture Center, they are still highly-skilled buildings that are better than the majority of what passes for architecture these days. While Russell's argument is pretty weak (are Piano's projects really so repetitive that one loses track of one's locale, be it Bonn or Boston?), his call for variety in museum architecture is warranted as is his plea for "museums [to] undertake a deep inquiry that combines an insightful designer with [the] museum."

If this phenomenon, the "Piano effect" if you will, is such a thing, then this is the textbook for it. Renzo Piano Museums collects 18 of these buildings, all but five of them complete as of the book's publication. This large number, spanning from the Centre Georges Pompidou (with Richard Rogers) in 1977 to this year's LACMA (and beyond) does not include the California Academy of Sciences in San Fransisco's Golden Gate Park, an important work now under construction that strays from the homogeneity that Russell admonishes. But this begs the question of how this book defines museum; if a natural history museum doesn't make the cut but a cultural center in New Caledonia or an art gallery appended to a conference center does, then arguments about quantity become less, well, quantifiable.

Which brings us back to quality. And the quality of the projects in these pages is undeniable, as is their variety. I've always taken the stance that Piano is one of the best architects practicing today because of this variety, because consistencies happen at the level of detail, not form or space or site. This makes for well-built but varied experiences for, in these cases, museum-goers. So it is the act of going to a museum and seeing what's on display, interacting with the objects contained within, that's the focus in these projects. While any book can only convey a small fraction of that experience, one understands this focus via Piano's treatment of the horizontal surface, the barrier between art (or whatever else is on display) and sky. More specifically it is the interaction between the sun outside and the space inside that concerns Piano.

Russell takes exception to this focus on light, something that recalls both Le Corbusier and Richard Meier, architects with careers alternately eclectic and consistent. Piano would appear to fall almost exactly halfway between these two, with his varied responses to site and program and his almost pathological desire to achieve that same even overhead light without repeating a skylight design twice. This last gives his museum projects a consistency that borders on the repetitive, both in form (the repeated scallops of the High Museum extension) and between buildings (the Art Institute addition in Chicago seems like a rehash of the Beyeler Museum that graces this book's cover). Which brings me back, lastly, to the unfortunate omission of the California Academy of Sciences, an important building, in this case, because it gives a portion of the typically-skylight-covered roof space over to vegetation and solar panels. In turn, the space and the experience changes, as it should, for the science museum, illustrating how Piano responds to program and location to create insightful and quality architecture.