The seemingly impossible vertical gardens -- vegetation growing on soil-less vertical surfaces -- that are finding popularity in the ever-more-green-minded media and public are the almost single-handed product of one person: Patrick Blanc. Contributing to the architecture of many high-profile architects and their commissions, and the author of a forthcoming book on the subject, it's hard to deny the appeal of vegetation appearing to take over an architect's creation, something that might have only seemed possible with Photoshop until very recently. 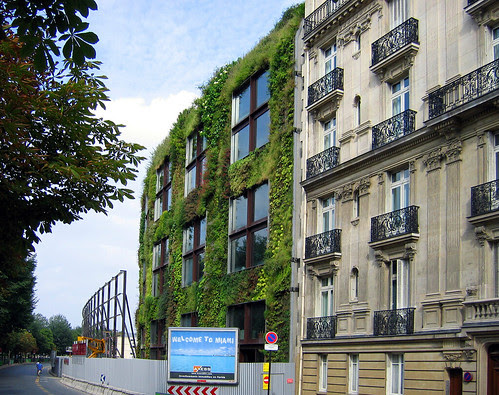 The Musée du quai Branly in Paris, France by Jean Nouvel is one of Blanc's most well-known installations, overshadowing the architect's formal bravado on the museum's other faces. It makes the relationship between old and new striking, even though Nouvel picks up on the regular openings of the neighbor. It seems to indicate that now real vegetation is architectural ornament, where the old building only represented nature in the engaged Corinthian capitals. 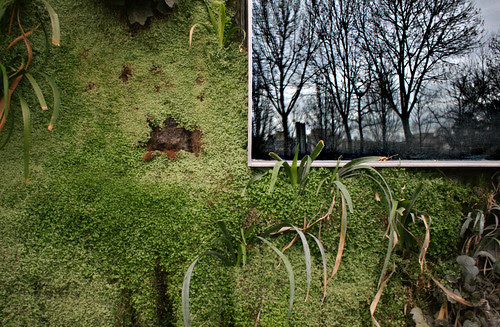 Another recent, high-profile installation by Blanc is at the CaixaForum Madrid by Herzog & de Meuron. The vertical garden stands in opposition to the rusted steel mass protruding from the stone base. These two facades front a small plaza, making the vegetal wall a backdrop for art and/or a billboard for "green".

Of course, even though Blanc holds a copyright for his installations, this does not preclude others from attempting other vertical greenery. Coinciding with the AIA Convention in Boston next month is "Parti Wall, Hanging Green," a project by Young Architects Boston Group, comprised of Ground, Höweler + Yoon Architecture, LinOldhamOffice, Merge Architects, MOS, over,under, SsD, Studio Luz, UNI, and Utile.

The installation "will be suspended from the newly converted loft building known as The 1850, located at 90 Wareham Street in Boston’s South End. The five-story-high planted structure will face Wareham Street across from the pinkcomma gallery, where an exhibition of the installation’s collaborative design process and works of these ten firms will be on display."

In Boston the installation will be as much a test (for the success of different plants in different systems) as an expression of the potential temporary uses of blank party walls throughout the city, something other cities also have too many of, making the success of the installation potentially exportable.
Email Post
Labels: architectural element