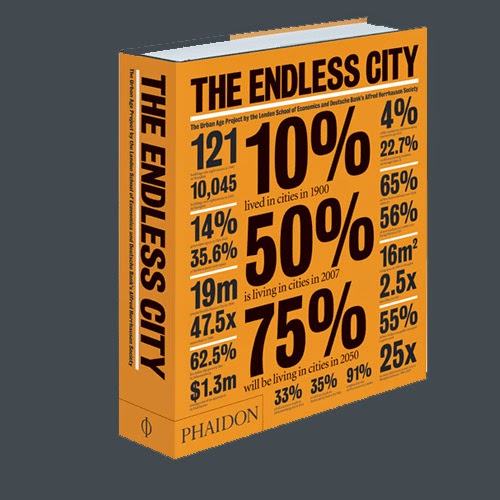 The stats on the cover of Phaidon's recent tome to expanding global urbanism paint a picture of what many people know but what many people don't want to believe: the world is primarily urban and it's becoming more so every day, from 10% in 1900 to 50% last year. The next 40 years will supposedly see this situation grow to 3/4 of humans living in cities. Buried within these statistics are the environmental, social, and economic problems that are increasingly defining life for many in the 21st century: destruction, isolation, and inequality, respectively (to name but a few). While this book does not have the answers to these and other difficult challenges, it does a great job of describing various cities around the world as we enter the time of the majority of humans being urban dwellers.

The book arose from a series of Urban Age conferences -- organized by the London School of Economics and Political Science with Deutsche Bank's Alfred Herrhausen Society -- that focused on six metropolitan areas: Berlin, Johannesburg, London, Mexico City, New York City, and Shanghai. While the continent of Australia is missing, and both Mumbai and São Paulo scream for inclusion (they missed the cut), the cities selected have enough diversity (geographically, economically, ethnically, culturally, etc.) that the organizer's goal of seeing particular conditions relative to worldwide urban trends is fairly successful.

The 500-page hulk of a book is broken down into digestible parts, beginning with introductory essays by the editors and other urban writers. Next, each of the six cities receives its own treatment of photos, stats, an essay by Sudjic, and an essay each on the characteristics of the city and the country/region in which it sits. After that roughly first half of the book, the reader is bombarded by more stats and is then treated to a number of thoughtful essays on urban issues by thinkers like Richard Sennett and doers like Enrique Peñalosa. A presentation of projects "demonstrating new urban thinking" in the cities follows, with quotes from the conferences rounding out the book.

One could draw a line down the middle of the book, declaring the first half to be about "particular conditions" and the second half the "worldwide urban trends," but the text and data throughout make the difference between the two murky, as the distinction between local and global is not so easy to define when food, for example, is flown across oceans to feed those able to afford it. It's as if the butterfly effect is no longer limited to air currents; it is a suitable analogy for the interaction of local and global forces, be it the repercussions of consumer choices on distant populations or increasing carbon emissions on just about everybody. While this is not an analogy proffered in the pages of the book, it is perhaps indicative of the type of thinking that the text and data inspires.

Ultimately the book is optimistic about the future state of cities and the world, even if a lot of policy and practical change needs to occur at the city, national and supranational levels. The organizers and contributors share a belief in cities and a belief in the power of individuals, organizations and governments to affect change. The reader that makes it through all 500 pages is not guaranteed to be swayed to that optimistic position, but the understanding of the urban condition(s) gained from the various voices and the generous, well-presented data is the key to the publication of the book and the decision to read it. As the urban population continues to rise and issues like climate change and poverty swell alongside, surely more books will tackle these issues. If they have half the ambition of this book, they will be warranted and, more importantly, welcome.