Book Review: After the Crash 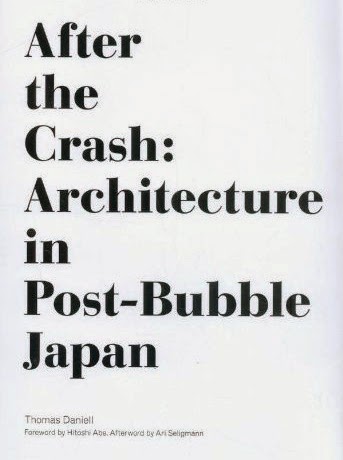 Architect Thomas Daniell moved to Japan in the early 1990's, as the country's "economy began a leisurely avalanche into now what is known as the Lost Decade." From 1995 (the year of both the Kobe earthquake and the Tokyo gas attack) to 2005 Daniell worked at FOBA, though in that period he also contributed articles on the architecture of his new home to Archis, L'Architecture d'Aujourd'hui, de Architect, Domus, Mark, and other publications. This decade coincides with the country's "post-bubble" years, as the book title indicates, a time of formal restraint, professional creativity in terms of commissions and output, an embrace of sustainability, a rise in adaptive reuse, and other leaner considerations. Daniell's thoughtful and thoroughly enjoyable essays culled from the above magazines capture the trends of this now historical moment, without necessarily aiming at such a thing; his essays document and critique creations when architects found themselves working in difficult times.

The collection categorizes the 25 essays into various themes (Domestic Spaces, Public Places, Revitalizing Metabolism, etc.), rather than presenting them chronologically. This tactic reduces the arbitrary nature of the latter approach, allowing the book itself to act as a study in discovering recurring and common strands in the post-bubble decade. The chapter on Nature and Artifice, for example, looks at projects by Terunobu Fujimori, Foreign Office Architects and even musician Laurie Anderson, a diverse collection that parallels the various interpretations of nature and its apparent opposite, interpretations that move beyond traditional views of nature in Japanese culture. Creative contemporary sustainability melded with apparently traditional forms is found in Fujimori's buildings, while FOA's extremely popular Yokohama Ferry Terminal exploits innovations in the computer's role in design and construction, and Anderson's project for Expo 2005 in Aichi is an experiential installation in a Japanese garden that rewards patience and increases ones appreciation of their familiar surroundings.

Born in New Zealand and finding his way back to Japan after a graduate degree in that country and a stint working in Europe, Daniell now calls Kyoto his home, but his expat status makes his view on the place and other Japanese cities a mix of experience and an outsider's point of view. The former is clear in the importance the author places on the inhabitation of architecture, the movement and sensation of the spaces, something balanced by the latter, his intellectual rigor that is consistent across the wide-ranging essays and time period. Daniell's study and revealing of the multiple layers below the surfaces of architectural projects is most revealing, such as how the plethora of single-family houses that litter glossy magazines relates to the transforming social conditions of the country. Ultimately Daniell does not fall prey to the typical view of Japan, mainly as a balance of the serene (temples, rock gardens) and the chaotic (Tokyo's urban fabric, its neon streetscapes). Instead he embraces the shades in between, exploring those and finding much to be learned, analyzed and shared.