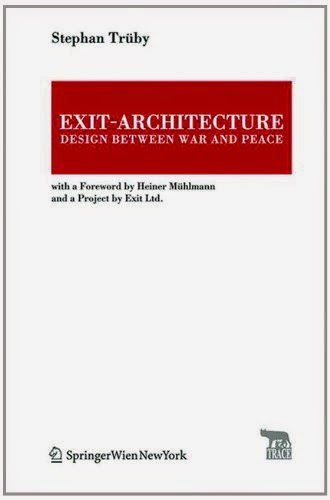 The notion that architects design spaces so they can be escaped from (Exit-Architecture) is an intriguing one, which architect and professor Steven Trüby from Karlsruhe, Germany theorizes in this provoking essay on war, stress and culture. He starts by dissecting one of the most famous quotes on architecture, Winston Churchill's statement that, "We shape our buildings, and afterwards our buildings shape us." Churchill uttered the phrase when pushing for the reconstruction of a space in House of Commons to its pre-WWII state, even though it would be too cramped for its purpose, something the British leader was aware of. While references to this quote disassociate it from this original context, Trüby wonders if dysfunctional cultural transmission like this is the norm, if decisions made under stress (the stress of war, in particular) shapes the spaces we inhabit. The way spaces facilitate people fleeing them is but one example of this.

Trüby's premise is predicated on the notion that culture is what is transmitted, a value-free definition that focuses on the fact something is carried down in time, not if it is dictated as culture by an elite via monuments, artifacts and the like. Regardless transmission obviously occurs via architecture, with the author focusing on the codes, conventions, rules and laws which shape architecture, particularly those related to war. As Trüby explains, "war becomes the fulcrum on which evolutionary observations of architectonic culture are based," a paradoxical assertion that links architecture to the innovations of war, from modern standardization to "the aesthetics of stealth and camouflage."

Three case studies look at how culture is transmitted, each rooted in war. These include the Temple of Janus from Roman antiquity, the Pentagon and the Jamarat Bridge near Mecca. These diverse examples, like the book itself, raises more questions than it does provide answers. More importantly, the book as a whole provides a lens for looking at architecture, in which one peels back the layers of accretion that find their impetus in conflicts distant and long resolved. Surely not all architectural creations have this lineage, but in a world with constant warring and leaders set on keeping it that way, the separation between war and its effect on various aspects of society seems smaller every day.