While masonry is often perceived as impenetrable, a suitable material for keeping out wind and rain, it is actually by nature porous, to a greater or lesser degree depending on the specific material and its treatment. Cavity walls, for example, are designed to shed any water that may weep its way through the outer brick and mortar facade. Brick is seen as a veneer that keeps out most air and water, but it is not the sole means of doing such.

Some architects exploit this inherent porosity of masonry -- be it brick, stone or concrete -- by designing walls that allow light, air and water to penetrate. The most famous examples are surely Frank Lloyd Wright's four Textile Block Houses in sunny California. Wright used horizontal and vertical steel reinforcing bars and concrete grout (instead of standard mortar) to create three-dimensional compositions of flat and textured custom blocks, the latter either open or with glass inserts. The 1923 Freeman House shows the wonderful effects of Wright's experimentation, namely making the "gutter-rat" (the architect's term for standard concrete blocks) appear lighter than it really was, ironically aided by the invisible strength and weight of steel. 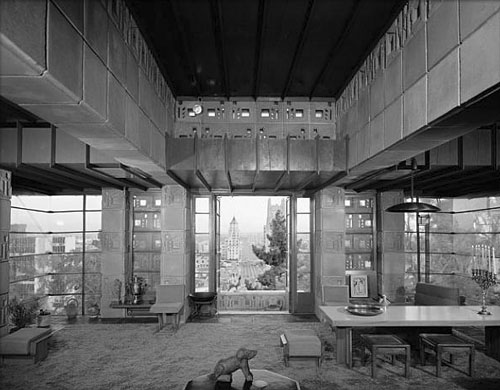 A recent example that achieves a similar lightness is Peter Zumthor's Kolumba Diocesan Museum in Cologne, Germany, which opened in 2007. A band in the "brick coat" of the new building -- located directly over ruins of a gothic church -- illuminates this in-between space, what the architect calls a "memory landscape." The "filter walls" create beautiful lighting effects inside the space that is not burdened by requirements for conditioned air. 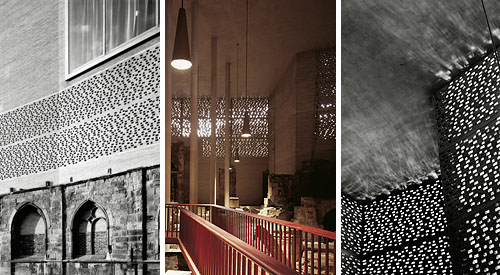 Another project without concerns for keeping out the elements is the Nazarí Wall Intervention in Granada, Spain. Antonio Jiménez Torrecillas's intervention fills a gap in the Nazarí Wall, caused by a 19th-century earthquake. The wall allows passage between its two layers, in which light dapples through the random openings in the stacking of granite blocks. 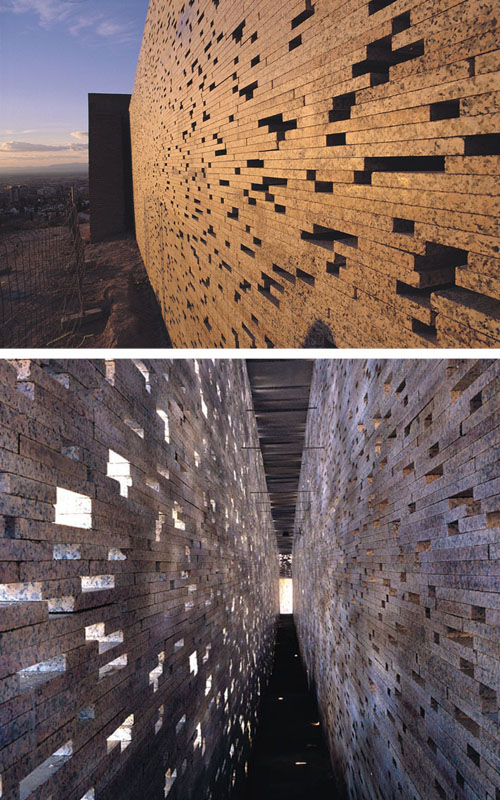 Kengo Kuma's earlier Stone Museum from 2000 in Nasu, Japan creates a series of pavilions created from stacked stones, quarried from the same stone as the existing buildings on the site. Unlike the wall in Granada, here the openings are composed in regular patterns. Glass infill in portions gives a colored glow to the narrow slots during the day and at night. 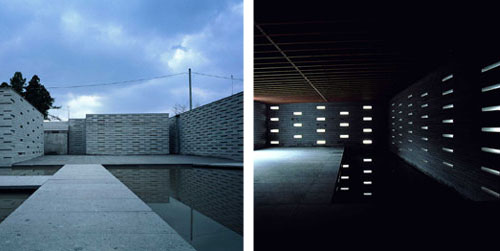 Last is the award-winning design for the offices for Dehli, India's South Asian Human Rights Documentation Centre (SAHRDC) by Anagram Architects. While this is the only image I've encountered for the project, it tells volumes. Openings in the brick wall are achieved not be leaving gaps in the wall (like the three projects before) but by the rotation of the bricks in plan. As the brick moves past a certain angle, the gap between it and its neighbor becomes too large for mortar, and it therefore becomes an opening; the bricks above and below span the opposite direction to make the maneuver structurally sound. Regular rectangular-sized openings are created by the architects' handling of the brick, but the variable coursing of the brick up the wall means the texture of the wall appears undulating, as if the wall is billowing as it rises. It's a beautiful example of what can occur when the architect allows the brick to lead the way, letting the simple form of the modular unit be a guide for more complex patterns, textures and openings. 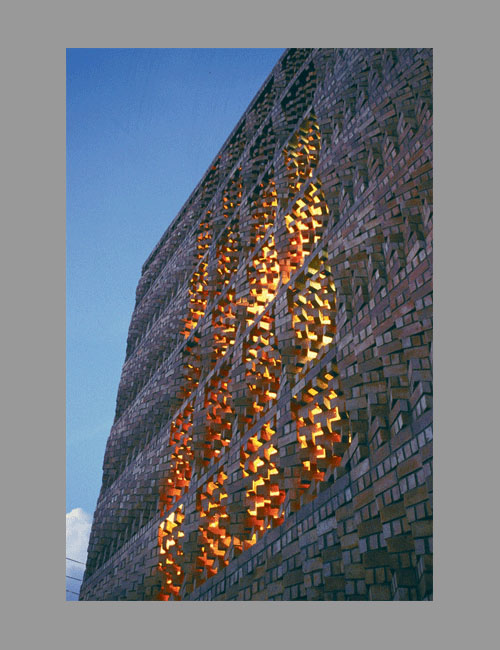