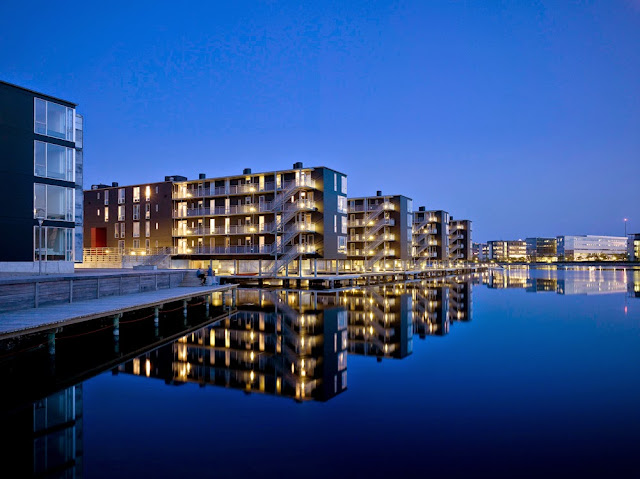 The project consists of 120 flats -- half of them social housing and half of them private -- and a communal house placed in the Copenhagen Harbor. It is the result of a 2003 competition with an unusual brief, partly in the 50/50 social housing-private ownership mix, but not least in the fact that the Copenhagen Harbor authorities had donated an area of water for the competition, as they wanted a model project to boost development on the southern harbor.

The money saved from not having to buy land could instead pay for a large landfill that would accommodate buildings and cars. Our proposal was to eschew the landfill and instead build an artificial island in the form of a one-story parking garage. This would get rid of the cars that plague the spaces between the houses and bring the houses closer to the water. All flats in the narrow buildings receive daylight from two or three sides. Floor-to-ceilinng windows next to partition walls bring the limited nordic light into the rooms and make the most of the light reflected off the water.

The sea-view has become an obsession in real estate, but looking at the sea is the least interesting and certainly the most passive way to enjoy living near water. We claimed that the spaces between the houses and the wooden decks around the parking island would encourage active use of the water, swimming, fishing, kayaking. When the first residents moved in this spring, we saw people fishing from their balconies, swimming, even partying on a floating platform!

Building on the water was a challenge, but once the island was established, the plan helped organize things: the floor of the parking house was dimensioned for a single, large tower crane on tracks and the houses were built one by one as the crane moved from one end of the island to the other. The general structure is prefabricated concrete, but because of the difficult site elements like balconies, stairs and fully fitted bathrooms were also prefabricated and simply lifted into place. 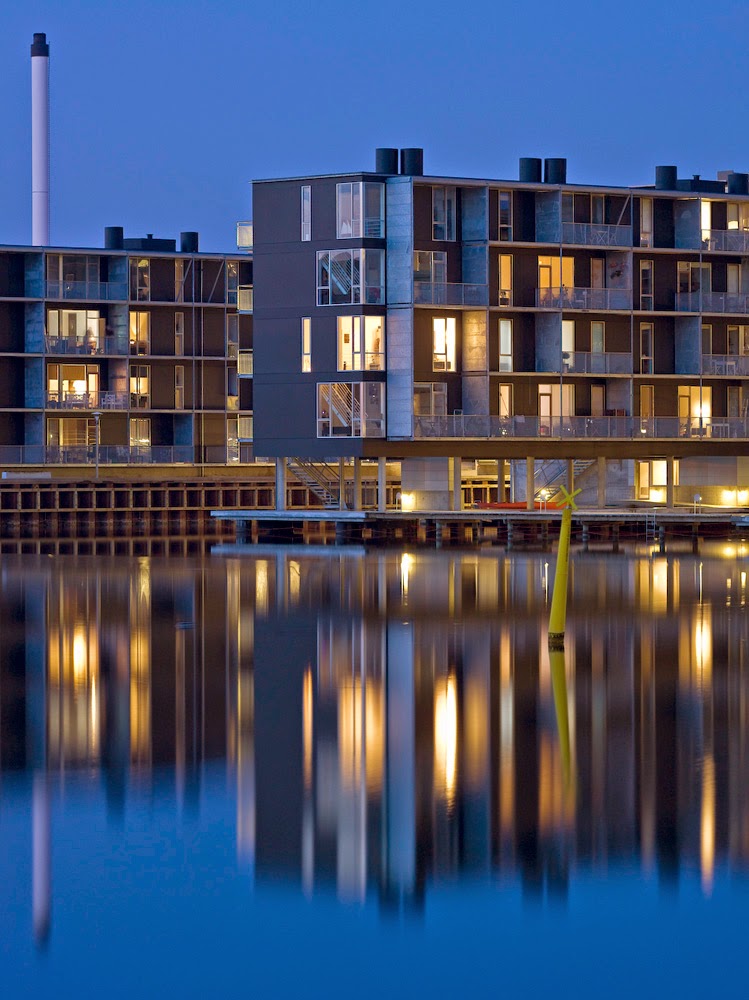 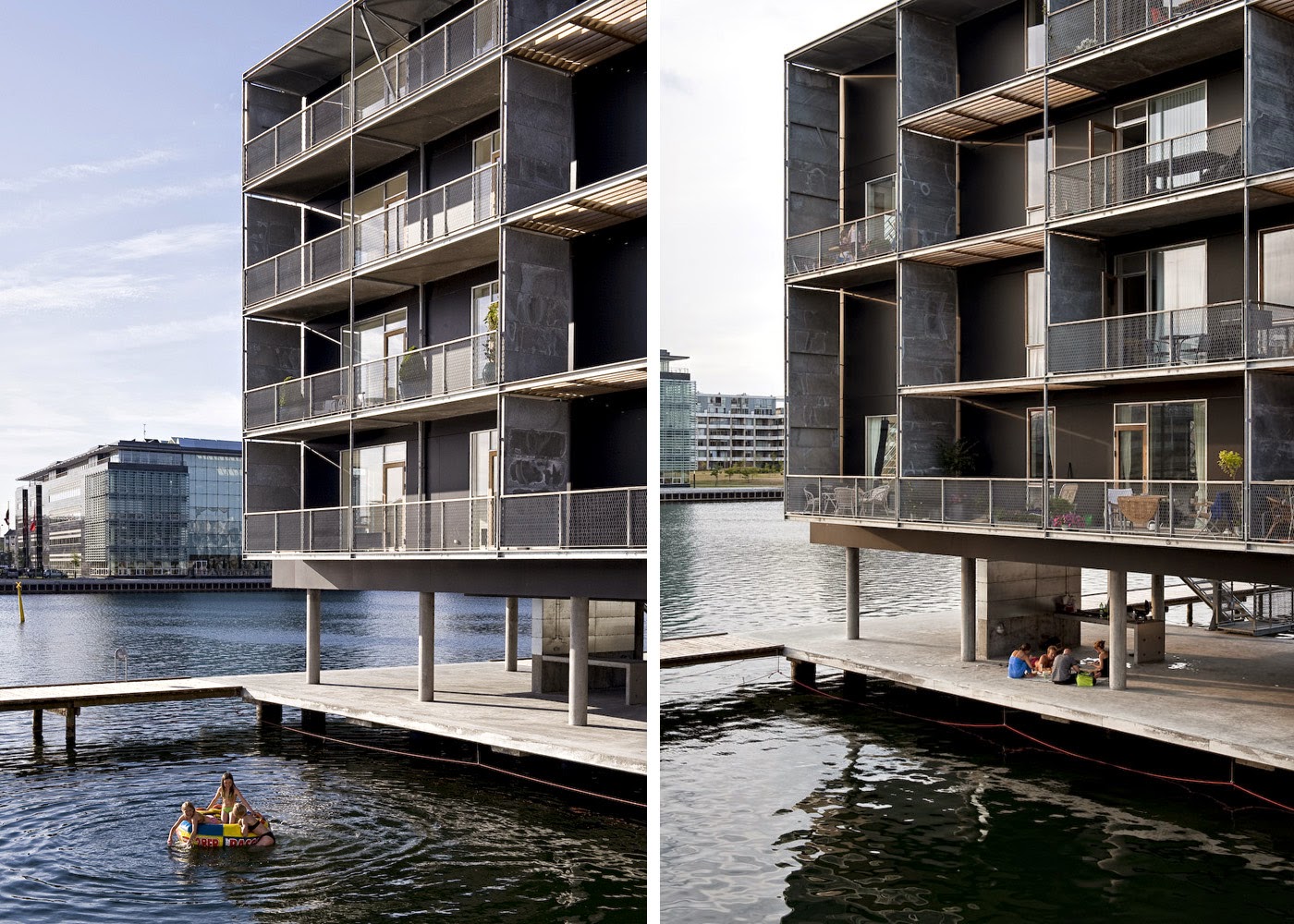 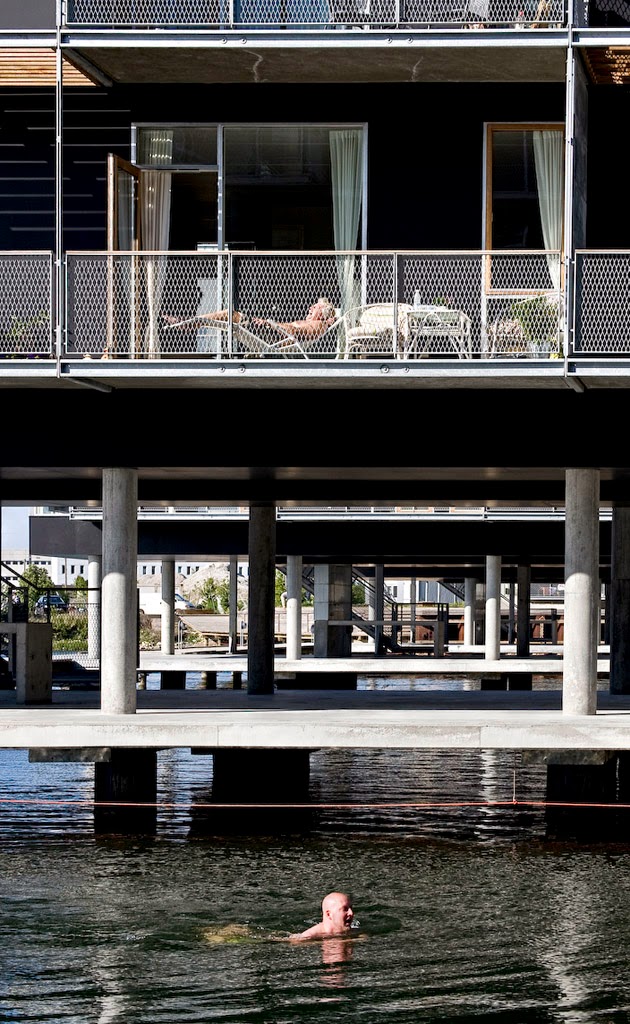 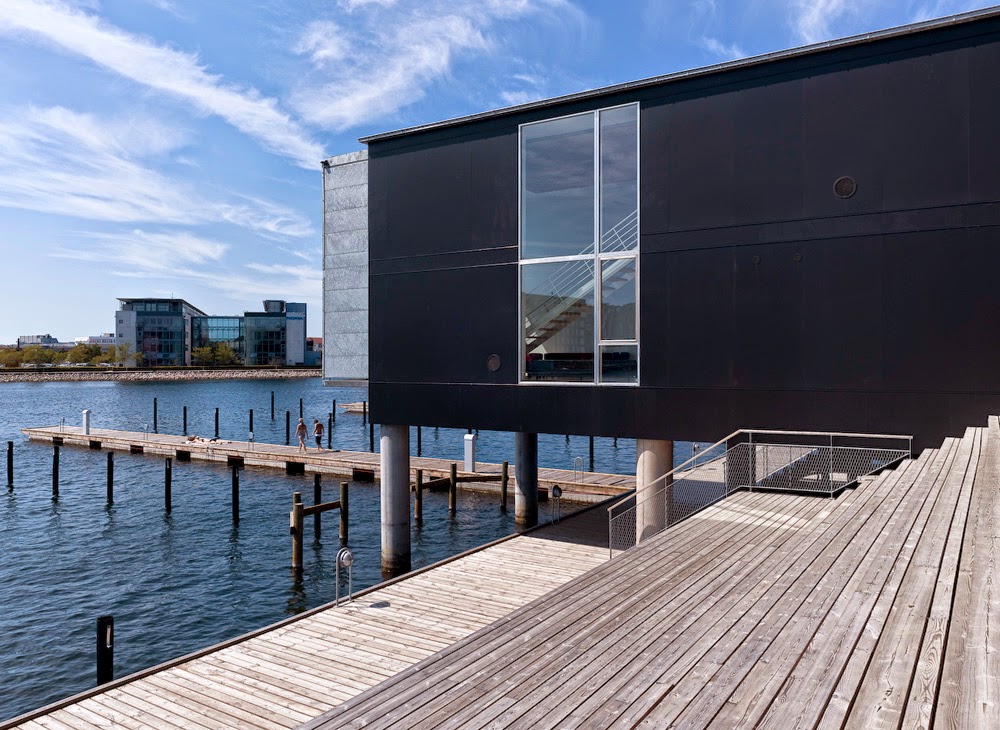 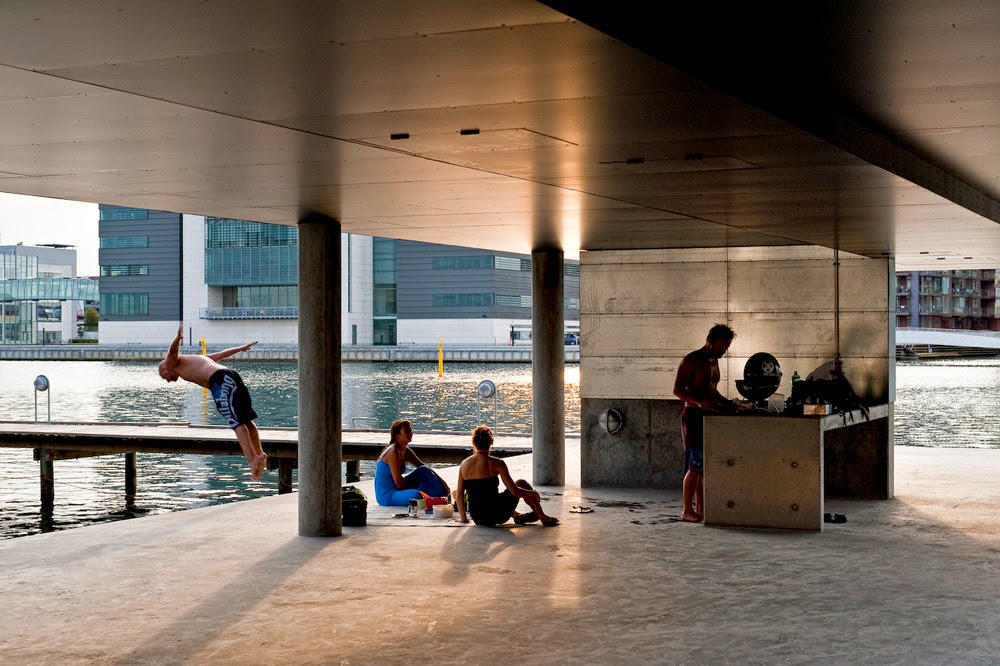 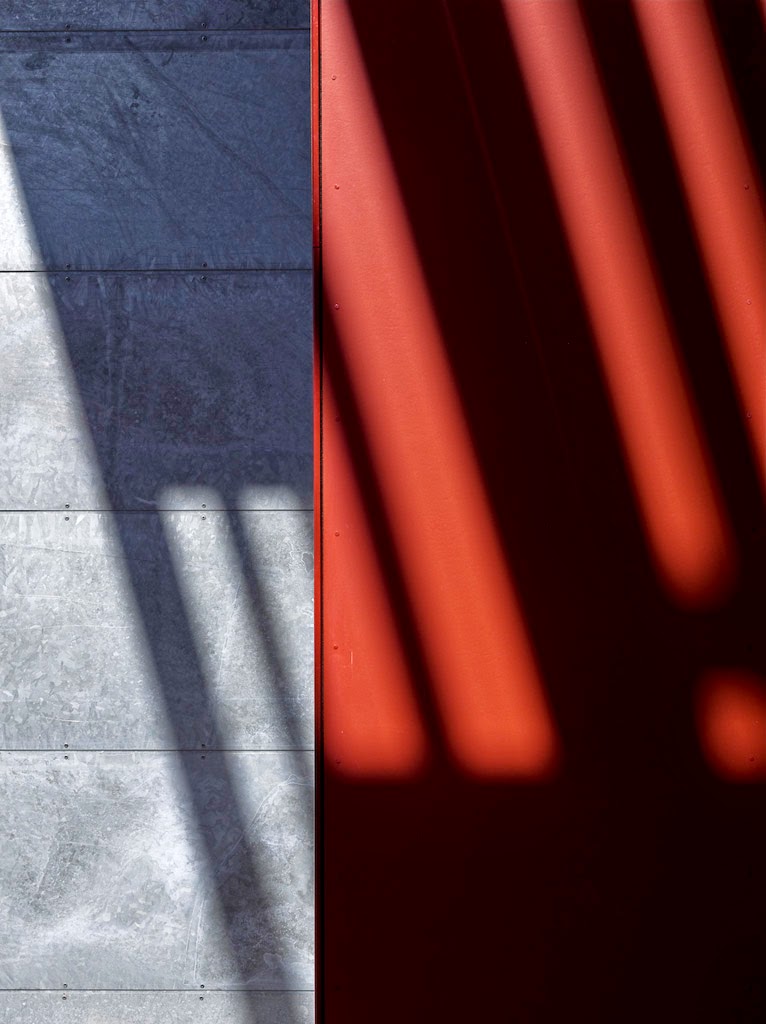 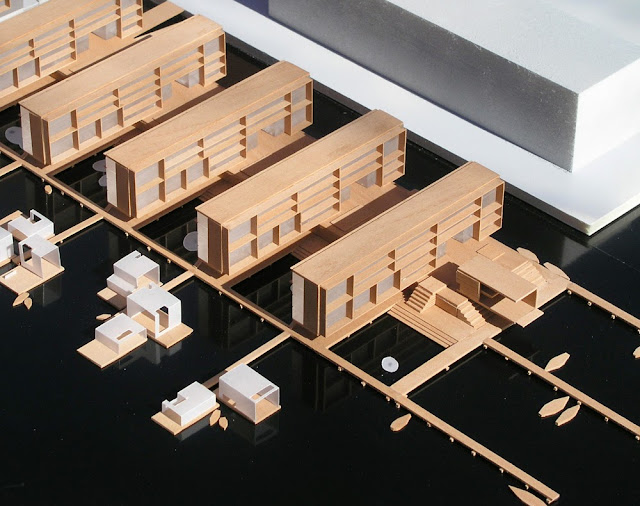 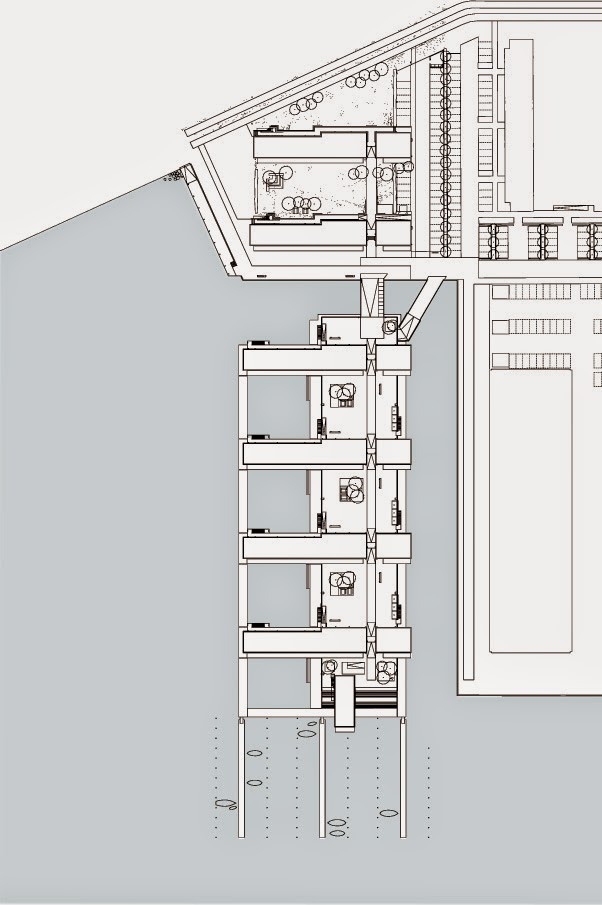