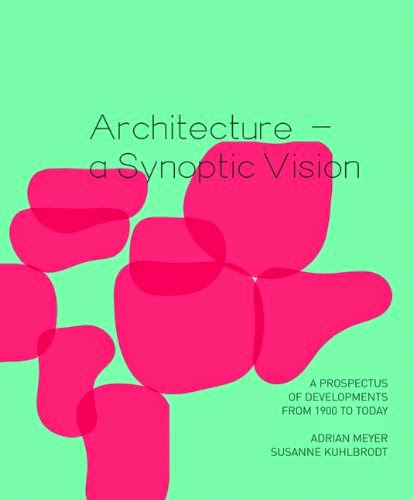 syn·op·tic: affording a general view of a whole.
pro·spec·tus: a preliminary printed statement that describes an enterprise.

Created as part of a lecture series at the Department of Architecture at ETH Zurich, this short book and accompanying poster focuses on "the liberation of space from the beginning of modernity to the present day" and the amorphous relationships of architectural styles and movements spanning the same period, respectively. Clocking in at just over 20 pages, the first is carefully packaged with the latter in a printed folder whose cover hints at the large-format timeline within.

The short essay presents the liberation of space by exploring three types of spatial organization: the center, the horizontal, and the third dimension. The first is most strongly linked to what came before, such as Palladio's villas. From Schinkel to Siza's recent Fundação Iberê Camargo in Brazil, we see how the center perseveres as a means of organizing the plan and focusing attention, even when the form becomes sculptural and the center becomes a void. The second obviously finds root in Frank Lloyd Wright's prairie houses, but Mies's Brick Country House project exploded the constraints that Wright still followed, enabling buildings like SANAA's Glass Pavilion in Toledo, Ohio to find form. Lastly, the third dimension finds influence in that other modern master, Le Corbusier. Following from his horizontal-vertical architectural promenade in the Villa La Roche, we see Friedrich Kiesler's ahead-of-its-time Endless House and the sculptural forms of Frank Gehry's Guggenheim in Bilbao, a couple fairly obvious choices. Ending with Toyo Ito's design for the Metropolitan Opera House under construction in Taichung, Taiwan, we notice how the traditional elements of architecture (wall, post, roof, window, etc.) have disappeared, in favor of a continuity of surface, composed into "sound corridors and tubes" that make the building an extension of the sound contained within.

A certain sense of incompleteness, stemming from the brevity of the booklet, is made up for in the accompanying poster. Not explicitly referred to or explained in the booklet, this companion charts major architectural movements (Modernism/Classicism, Dogmatic Modernism, Expressive Modernism, Reflective Modernism) from 1897 to 2008, locating major architects within the mix. Comprised mainly of Western European architects (more international flavor appears after the Second World War), the timeline is the collision of a highly ordered grid with amorphous blobs, the former situating architects in time (vertical) and in terms of form (horizontal, from logical on the left to expressive on the right). The interaction of the two -- the form, extent, and location of the blobs in particular -- raises more questions than it provides answers, though perhaps that is the point. 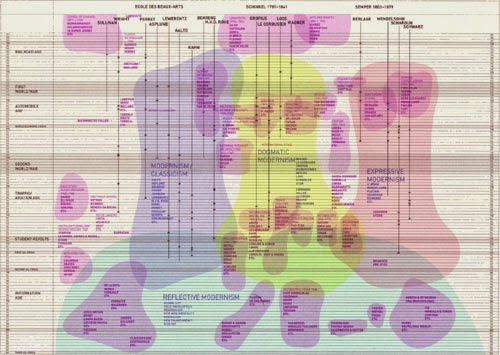 At first glance the poster recalls Charles Jencks's famous "Evolutionary Tree of Twentieth-Century Architecture." We see the same timeline (horizontal) interacting with formal concerns (vertical, from logical on the top to unself-conscious on the bottom), but the blobs in this case seem to make more sense, like a connective tissue that binds everything together but discovers particular strands that are stronger or more populous than others. Additionally, the underlying grid is just that, something there but not something that overrides the location of a particular architect within the continuum. So can it be said that ETH Zurich's "synoptic vision" expands or improves upon Jencks's evolutionary tree? I'd say no, even though it packs much more information into its large-format prospectus.

[Charles Jencks's "The Century is Over, Evolutionary Tree of Twentieth-Century Architecture" with its attractor basins, scanned from Architectural Review, July 2000, p. 77.]