On the heels of 2007's opening of the administrative/visitor center at Queens Botanical Garden, the borough I call home has a string of high-profile public projects in the works, many under construction. Below are some details.

[Museum of the Moving Image by Thomas Leeser | image source]

One of the borough's cultural gems is the Museum of the Moving Image in Astoria. An expansion designed by Leeser Architecture will double the museum's facilities, create a new entrance and courtyard, and fuse the architecture "seamlessly with the moving image." The three-story addition at the building's rear will be clad in pale blue aluminum panels.

[Museum of the Moving Image by Thomas Leeser | image source]

Work on the foundations and subsequent steel work began late last year. Neither the architect nor the client's web page indicate an opening date, though I'd guess sometime in 2010. 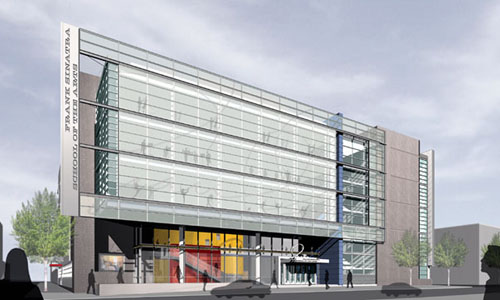 Across the street from the Museum of the Moving Image is the Frank Sinatra School of the Arts High School, a new building by Polshek Partnership. The 1,000-student capacity school has a strong presence in the neighborhood, stemming from its scale as much as the articulation of the three main façades. I'm guessing from that since the building is almost complete it will open this fall. 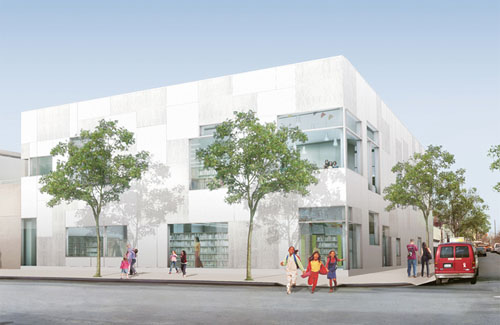 A couple buildings for Queens Library are worth noting. The first is The Children's Library Discovery Center in Jamaica by 1100 Architect. The 14,000 sf building includes exhibitions, a "cyber center", story areas resources (aka books), among other things catering to kids and fostering their interest in learning. All are behind a simple, flat box that is punctuated by rectangles of vision glass in apparently random locations. 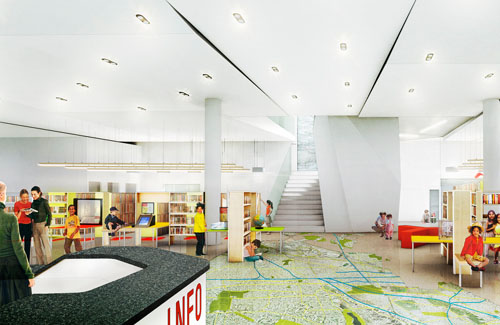 The Discovery Center is scheduled to open in late 2009. 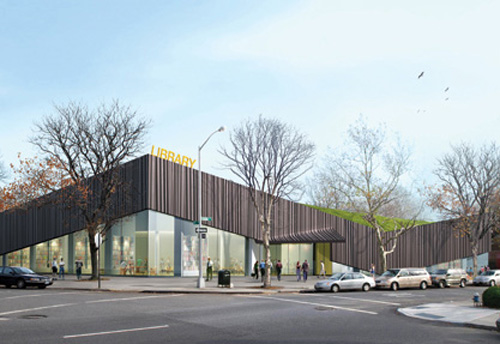 Another Queens Library project is the expansion of the Kew Garden Hills Library in Kew Garden Hills by WORKac. I saw the project at a lecture by the firm's lead duo, but unfortunately neither they nor the client have images of the rather exciting design online. Basically the expansion of the corner building occurs at the two street fronts, like wrapping a square with an "L" in plan. This wrapper is clad in a solid, undulating wall of concrete that is lifted at the corners to reveal storefront glazing below, letting light in and allowing views out. The concrete wall is low at the entrance to mark its location and provide a peek of the green roof above. The shallow, V-shaped section also creates clerestories over the existing roof, providing even more light into the open-plan of the library. (I'll post images of the design as they become available.) 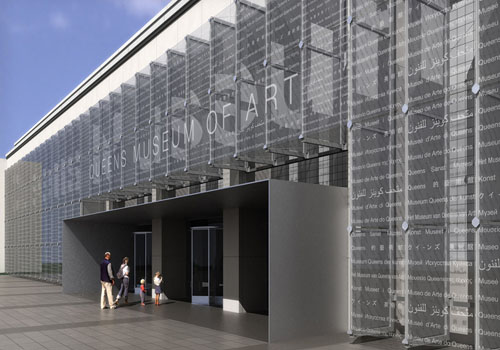 Lastly are a couple projects in Flushing Meadows Corona Park. The expansion of the Queens Museum of Art by Grimshaw Architects will double its size to 100,000 sf. Residence will have to say goodbye to the World's Fair Skating Rink, since the expansion will extend into its area to the south of the existing building. 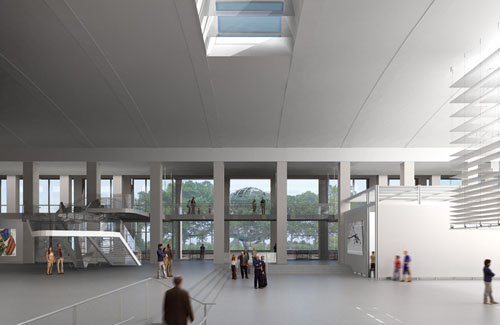 According to the museum, "new entrances on both the east and west sides of the building will welcome visitors into a large skylit lobby. A stunning etched glass panel running most of the height and length of the [west] façade (top image) will make the Museum highly visible to everyone driving along the Grand Central Parkway."

The nearby Queens Theatre in the Park opened last year in a renovation/addition Caples Jefferson Architects. The design includes a new cylindrical, glass structure flanking the 1964 World Fair's Theaterama by Philip Johnson and Richard Foster, which the Theatre also occupies. Even with a gently curving enclosure capped by a nebula oculus, the new digs have a hard time competing with the adjacent New York State Pavilion also by Johnson and Foster.
Email Post