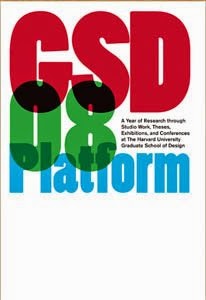 In terms of books, the output of the Harvard University Graduate School of Design (GSD) is more prolific than just about any school of architecture. In addition to Rem Koolhaas's Project on the City output and the CASE series, books stemming from studio work are numerous. On my weekly page I've reviewed Function of Ornament, Project Zagreb -- both beginning life as studios at GSD -- and a couple readers from the school's excellent Harvard Design Magazine. Their books are marked by a depth of research that is equaled by the quality of the graphic output, be it diagrams, architectural drawings or renderings. Where other schools would not even think of aiming for a book before a class starts, in many cases that is the goal of GSD studios, owing as much to the school's name and reputation as to the high-quality content.

GSD 08 Platform, like the school's Studio Works, gathers together a year's worth of select student projects. But where those publications clearly focused on the studio, this new book tries to capture the experience at the GSD in and beyond the studio. Alongside the typical imagery of student projects are the professor's project descriptions, excerpts from lectures, essays from students and professors, exhibit documentation, and interviews with architects. All of this fits into eight sections (Techniques, Nature, Non-Formal, Typology, Geographies, Technology, Material, Discipline) that are highlighted by colored pages. It is evident the book's design is carefully considered, be it the graphic design and even the bookbinding.

The sense that one gleans from the various contributions is of a school that embraces those from beyond its borders -- visiting professors and lecturers, especially -- but that is at the same time exclusionary, like an inaccessible castle in days of old. This is reinforced by the omission of bios for the major contributors, making the book geared to those "in the know" rather than to an audience who is not familiar with people the school calls guests, much less their own faculty. Other quibbles of the book are the lack of descriptions for student work (a couple thesis projects receive this treatment) and the lack of even snippets of syllabi or reading lists for classes beyond studios. Highlights include Sanford Kwinter's talk on chreods, Teddy Cruz's speculation on the future of first-ring suburbs, Jin Young Song's impressive thesis project in Korea's DMZ, Homi Bhabha's humble portrayal of the Aga Khan Award), some displays of manufacturing techniques on stone facing, and Shigeru Ban's retelling of how he became involved with disaster relief buildings.