The term "earth berm" -- preceding building, house or architecture -- conjures up images of 1970's shelters by the likes of Malcolm Wells (author of the seminal Earth-Sheltered House) and others. The recent green architecture trend had to overcome associations with houses built during the decade's oil shortage, buildings rooted in hippie dreams of communing with nature and making the house part of the land. Now the spate of sustainable architecture exhibits a hi-tech appearance, in line with the projects featured by Paul Buchanan in his Ten Shades of Green. But a good deal of architecture -- green or not -- integrates earth as an architectural element, used not only for its thermal insulation but also for metaphorical linking of building and landscape and for capturing more space for use. 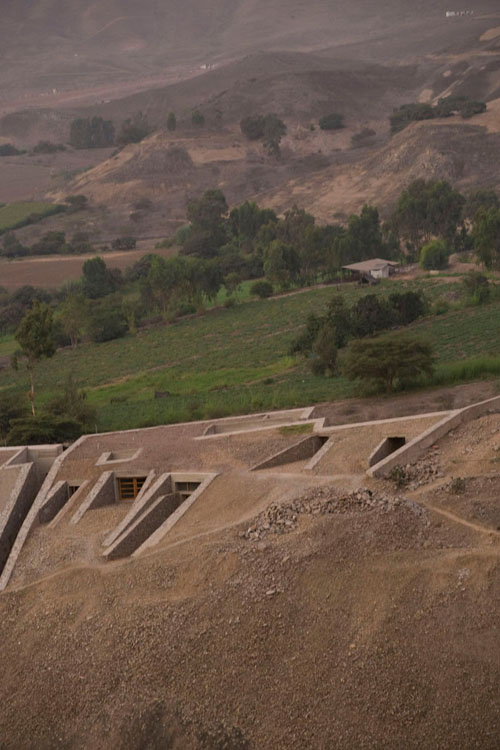 The hillside residence in Pachacamac, Peru by Longhi Architects, found over at Arch Daily, is as formally removed from 1970's earth architecture as could be. It harks back even further to ancient stone dwellings in Peru and other American countries. This project makes one realize that earth berm does not equal green or grass; it is whatever is local to the site, in this case basically rocks and dirt. 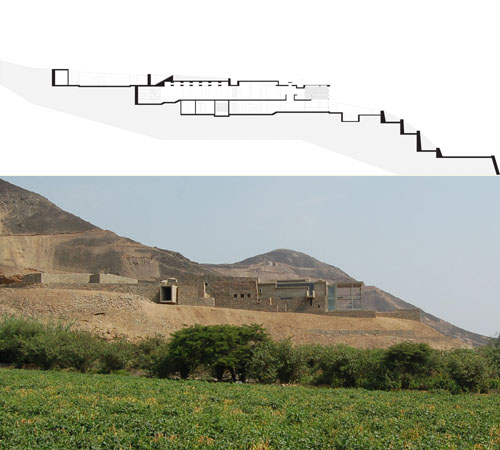 The section and view above illustrates how the house for a retired philosopher utilizes the hill into which it is buried. From up high the house disappears, while from below it is a combination of stone and glass, with the latter providing selective views for the occupant. The interior reflects the overall parti, as spaces are carved and openings are slots like in a bunker. 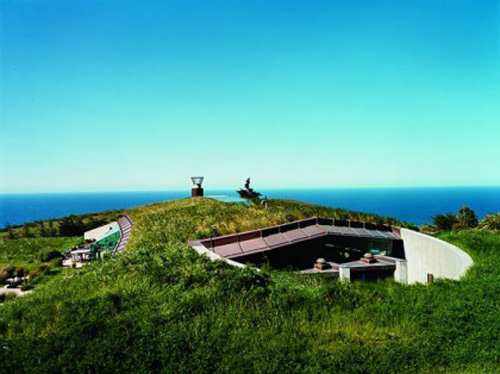 A project that would be at home in Aaron Betsky's 2002 book Landscrapers is the Cooper Point House in California by Mickey Muenning. It is reminiscent of the 222 House in Wales by Future Systems included in that book, a project that melds tradition with advances in structural engineering to create a slender oculus fronting an open plan. But where the house in Britain only opens itself on one side, Muenning's house is basically mirrored, with openings on both sides. This gesture makes the green strip rising over the house act like a bridge, and the house can be said to be fitted underneath this structure. 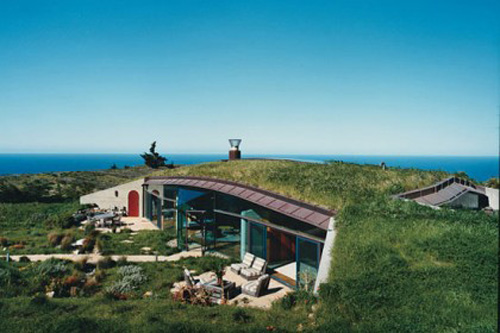 But rather than focus exclusively on earth berms in residential architecture, the type that finds close ties with the 1970's green movement, the use of this architectural element in public buildings says more about the its exploitation and potential. 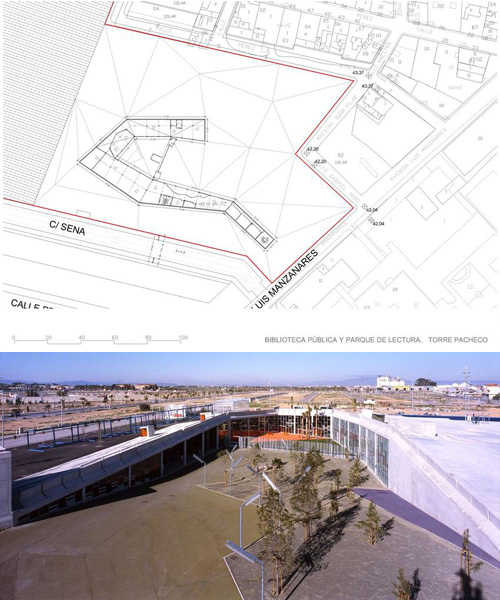 The Torre-Pacheco Library in Murcia, Spain by Martín Lejarraga (featured in a+t's The Public Chance) illustrates a way of blending the building with the surrounding landscape -- artificial or natural -- to create usable roofscapes. The U-shape building is a continuous piece of the larger terrain that is folded into different triangular areas, per the plan above. From the park area the presence of the library is highlighted by skylights poking through the ground plane and palm trees rising from the internal courtyard. 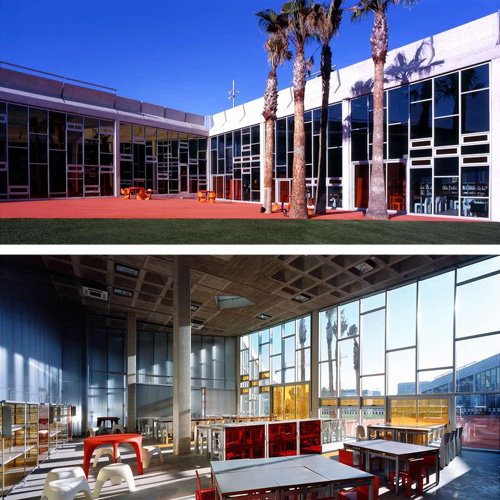 The various spaces focused on the courtyard feature generous glazing and therefore sunlight. These spaces, minus their sloped ceilings in parts, convey little of the fact one is underneath a park. In addition to the library functions are an outdoor reading patio, night study area, lecture halls, conference rooms, exhibition halls, and the park itself, catering to the nearby public schools as well as the growing population in this area borne of sprawl. 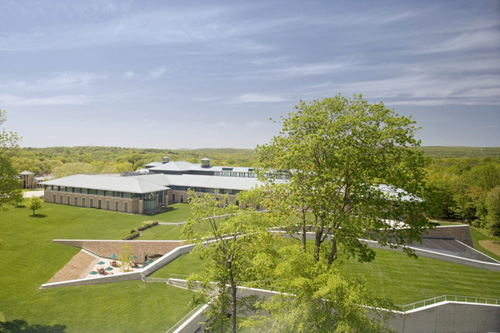 Arch Daily also highlights RMJM's design for Becton Dickinson's Campus Center in Franklin Lakes, New Jersey. A similar parti to the library in Spain is used, namely locating functions under roofscapes, with lower open spaces created in between (Dominique Perrault's Ewha Women's University Campus Center is an extreme example of this parti). RMJM connects the Campus Center underground to two adjacent buildings. Where the two halves of their design meet at pinch points, terraces are created. Potential uses for the grass roof is not clear in these photos, but it should be allowed, lest a great opportunity be missed. 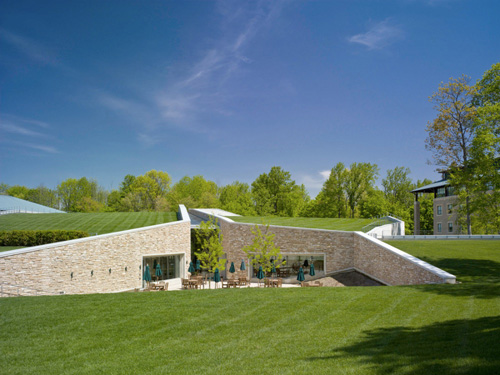 These few examples show not only that earth berms in architecture are alive and well, but how their use is social as well as environmental. The earth's mass is beneficial for tempering inside spaces -- and therefore reducing the need for energy-hogging mechanical equipment -- exactly why earth berms became popular at a time of limited energy supplies. These sort of projects tend to cost more than above-grade solutions, due to the cost of cutting and filling, but that cost can be offset when taking the savings of energy costs over a long period into account. In many cases the berms need to be combined with other elements, such as facades with solar devices to regulate heat gain.

The Torre-Pacheco Library illustrates the greatest potential for the social utilization of the shared roof/ground surface. It helps that the project is situated in a larger park, so the library can then be "folded" into it, an extension of the various park uses. Like the house in Peru, the library seems a far cry from what we think of as earth berm architecture, but if the earth is topped with green or hardscape is not the issues; it's the reclamation of the roof for other functions. This recalls Le Corbusier's Five Points, but instead of locating the roof out of reach of the public, these projects show the potential in bringing the roof down to a level of universal access.
Email Post
Labels: architectural element