Review published in edited form in The Architect's Newspaper, July 29, 2009 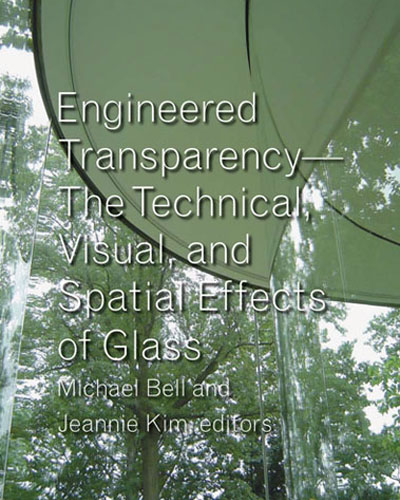 Glass’s domination as the material for architectural expression since the middle of last century is evident in a comparison of Manhattan’s skyline today with a photograph of the same before 1952. This year marks the completion of Skidmore Owings & Merrill’s Lever House on Park Avenue, the first all-glass curtain wall exterior for what came to be ubiquitous, the boxy office buildings in Midtown and beyond. A number of factors coincided to displace stone by glass: advances in structural engineering and façade systems, the fabrication of ever-larger pieces of flat glass, a need for more daylight in deeper floor plates, the improved thermal properties of glazing systems, and a desire for expressing lightness and transparency. Over fifty years later these considerations (structure, fabrication, thermal performance, vision, and metaphor) remain the domains for researching and evaluating glass in architecture.

These explorations are documented in Engineered Transparency, the product of a symposium of the same name at Columbia University in September 2007, a three-day event sponsored by Oldcastle Glass with The Architect’s Newspaper as the official media partner. A collaboration between Columbia University’s Graduate School of Architecture, Planning, and Preservation (GSAPP) and the Department of Civil Engineering and Engineering Mechanics, the symposium and book are equal parts architecture and engineering, theory and practice, eye candy and data. The further involvement of the Technische Universtitat, Dresden’s Institute of Building Construction guarantees a balance between technical material research and what Dean Mark Wigley describes as GSAPP’s “radical experimentation … as a laboratory on the future of the built environment.”

The book’s five main chapters—essays, projects, technical innovations (material and structural), and the visual and spatial aspects of glass—follow this architecture-engineering split, even though the symposium and proceedings try to overcome such a condition. The first chapter prevails in linking the current exploration in glass to its historical impetus, primarily Paul Scheerbart’s 1914 book Glasarchitektur, but also Joseph Paxton’s Crystal Palace of 1851 before it and Colin Rowe and Robert Slutzky’s influential essay “Transparency: Literal and Phenomenal” from 1964. Each essay carves a niche from the various considerations of glass and its effects, from its manufacture and structural properties to the material’s varying degrees of transparency. What the essays make up for in diversity they lack in breadth of investigation, merely scratching the surface (no pun intended) of the myriad theoretical and practical issues surrounding the material. The potential of laminated glass in projects like Herzog & de Meuron’s 40 Bond and Kruunenberg Architecten’s innovative Laminata House is one glaring omission ripe for exploration. The same deficiency is found in the projects and technical papers that follow, a reflection of the symposium format and its regurgitation in book form more than the individual contributions. An extremely broad range of material is presented in the book and the companion DVD featuring symposium highlights, but it is far from a complete picture. Each paper can be seen as a starting point or provocation for the reader’s continued investigation elsewhere.

Preceding the chapters above is a brief portfolio of the buildings of SANAA, the collaboration between Kazuyo Sejima and Ryue Nishizawa, the former who gave the symposium’s keynote lecture. Their 2006 Glass Pavilion at the Toledo Museum of Art in Ohio sets a benchmark for the current apotheosis and future potential of glass in architecture, an embodiment of the considerations of last century in a decidedly 21st-century idiom. The design minimizes structure to the extent that the floor to ceiling spans of frameless, laminated glass seem to hold up the roof; sophisticated mechanical balancing and daylighting systems allow this single material to predominate; and a plethora of curved glass corners creates refractions, reflections, and layers to become, as Beatriz Colomina describes, “optical devices without any visible mechanisms ... [where the viewer] is suspended in the view itself.” Most uniquely, where editor Michael Bell and others point out the importance of insulated glazing units (IGUs) in façades, the Glass Pavilion expands these double layers to the scale of the building itself. Individual rooms defined by glass walls are held apart, with the inaccessible cavity space acting as a thermal buffer and becoming “the real space of the project,” again in Colomina’s words.

SANAA’s pavilion is a perfect manifestation of the book’s title phrase, the merging of the technical and the phenomenal aspects of glass. Research and engineering allows the material’s exploitation in the design, while the pavilion’s spatial experiences are unanticipated by the material’s technical input. Engineered Transparency provides a decent theoretical and technical background for a contemporary understanding of glass, one that leaves few areas unexplored, if only preliminarily so.
Email Post
Labels: book-review papress