This post is stop number three on the "Virtual Book Tour" for David B. Williams's latest book, Stories in Stone: Travels through Urban Geology. Below is my brief description of the book, followed by some commentary from Williams on some contemporary buildings in stone. Check out Clastic Detritus's book review and interview with Williams for stops one and two.

Stories in Stone links the natural and the man-made by tracing building stones used in various parts of the United States to their origin in the earth's crust. The Seattle-based writer takes the reader from Boston to Los Angeles, from "deep time" to the late 1990's, via investigations in brownstone, granite, gneiss, limestone, travertine and other stones. Looking at Brooklyn brownstones, the Bunker Hill Monument, the City Hall-County Building in Chicago, and many more pieces of American architecture, Williams reveals how buildings in stone are naturally, not just metaphorically, rooted in their place.

Unlike now-common claddings like glass and metal, stone allows a piece of architecture to not only express its construction but also the material's making. Rough cuts or polished surfaces exhibit the excavation and workmanship of pieces of stone, but the colors, patterns, fossils and other markings of the material also give clues to how the stone itself was produced millions or, in many cases, billions of years ago. Williams helps the reader decipher these clues, making the experience of seeing and touching buildings in stone that much richer.

By virtue of the subject matter (buildings and cultural history) and the author's background (geology and natural history), the book is non-specialized, geared to a general audience without dumbing down the science at the root of many of Williams's investigations. It reminded me in many ways of John McPhee's Annals of the Former World, yet the urban angle of this book sets it apart from other writings on geology (or so I'm guessing), with its focus on human constructions. I can only hope the book helps readers appreciate the depth found in building stone, a material I believe is in need of a resurgence at a time when smooth and shallow materials predominate in architectural design. 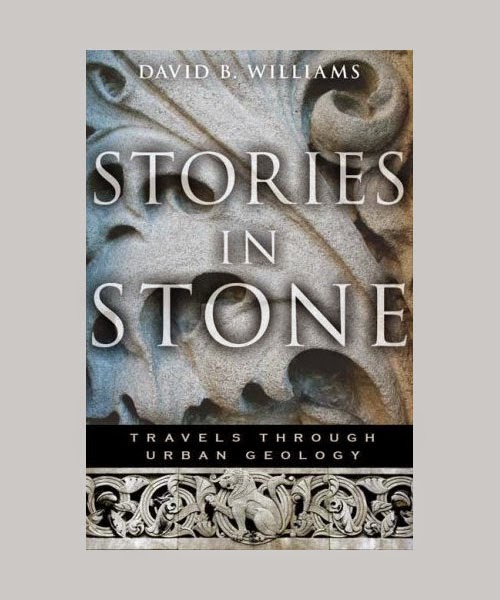 Outside of The Getty Center by Richard Meier and the Amoco Building (originally Standard Oil Building and now Aon Center) in Chicago, most of the buildings Williams discusses at length are more than 100 years old. So for my part of the virtual book tour for Stories in Stone I was curious to find out the author's thoughts on some fairly recent buildings in stone. Below are comments Williams has generously contributed for this blog, his responses to a handful of buildings I e-mailed him recently. 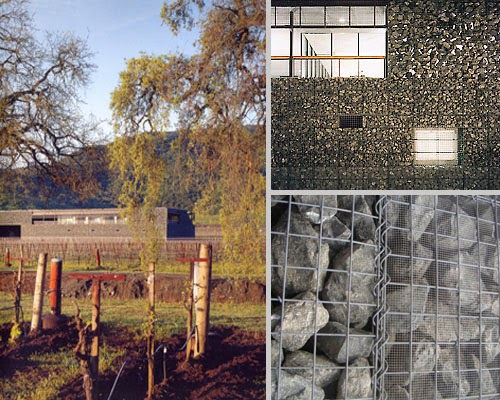 
The use of a skin of locally quarried basalt allowed the architects to do what I like best in architecture; they created a building that appears to rise organically out of the land. It’s as if the gravel on the side of the road leading to the winery had organized itself and taken over the building. I also like how the architects placed the basalt cobbles and boulders in steel cages, which allows the rocks to nest against each other often with large gaps. This in turn lets light into the building and has the wonderful contradiction of using solid stone to create light.

Basalt is not a rock commonly used in architecture, even though it comprises 40 percent of the Earth’s crust. (Basalt covers most of ocean bottoms and can erupt as extensive flows that cover hundreds of square miles on continents.) Because basalt solidifies from a lava on the surface, the top layers are often peppered with holes, called vesicles or vugs, caused by gas bubbles. The holes generally make basalt a challenging stone to cut into square blocks so those who do use the stone for building generally make a mosaic of stone and mortar. In addition, when basalt cools it can form great columns of material, also challenging to cut into precise shapes.

The steel cages, or gabions, were a brilliant new way to work with basalt as a building stone. Furthermore, it’s as if they have recreated the texture of basalt—solid and holey--within the gabions.

My final comment is that I am pleased again to see the use of local stone for building. Not shipping rock goes a long way to making a smaller global footprint. 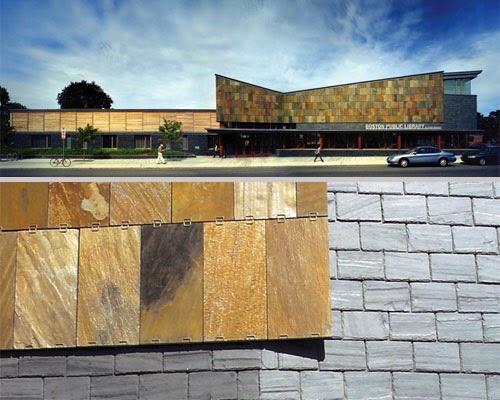 
Covered in slate, the new Honan-Allston Branch Library alludes to the Boston area’s long history of using slate. The metamorphic rock was quarried on an island in Boston Harbor as early as 1630, and in 1680, the General Court in Boston passed legislation requiring slate roofing. Originally deposited as a fine grained mud, then baked and squeezed into a stone that splits evenly into layers, slate has been used for everything from pool tables to urinals to tombstones to blackboards. (Perhaps to honor the use of slate blackboards, the library could have artists periodically chalk the building in temporary projects.)

Two types of slate clad the library. The dark gray slate comes from Vermont, whereas Norwegian quarries produced the golden rock skin on the building. Although the Norwegian rock is sold in the U.S. under the name Black Lace Rust Slate, geologists would call it a phyllite or mica schist, indicating a higher grade (greater temperature and pressure) of metamorphism than slate. The mineral biotite gives the rock its shiny sheen and oxidation of iron leads to the various hues of gold. I like how the architects gave the library a dynamic feel by using a stone with so much variation in color and which changes its face depending upon how the light strikes it.

Slate is an interesting building stone because it is generally used only as a two-dimensional material, which emphasizes length and width and not depth. The library exemplifies this use; every slab of slate presents the broad face of the stone. In doing so, it gives the building a lighter feel than in using stone that shows thickness. 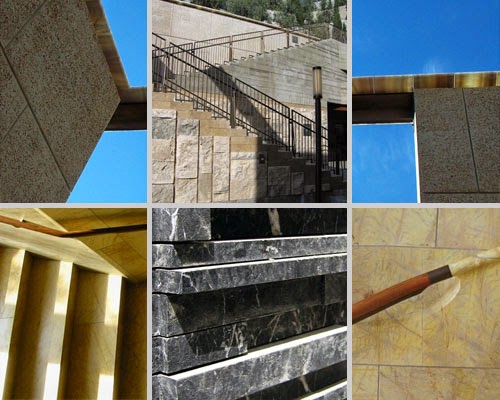 
This is the one building in the five that I have visited. Like the Getty Museum, the Villa is overwhelming: too much art, too many details to process, too much the feel of a set piece. At times it feels like stepping back into ancient times, except for the people yacking on their cell phones, planes flying over, and digital cameras chiming. But the stunning stone does stand out.

For the Romans of imperial times, there was no better way to signify status than by using colored stone obtained from the lands they had conquered. They acquired buttery marble from Numidia, purple porphyry from Egypt, green serpentine from Greece, and from the island of Chios, stone that resembles beef and bears the name portasanta, a reference to its use as door jambs at St. Peter’s. Each of these appears at the Getty Villa. Technically, most of these aren’t true marble, which geologists define as metamorphosed limestone, but the Romans used the term marble for any hard rock suitable for sculpture or architecture.

The stone is what connects the modern villa to ancient Rome, in part because the many colored marbles are real. They are not modern paintings on a wall or a modern building built to resemble an ancient villa. They are the actual stones of antiquity and they are the main feature that gives the modern Villa its gravitas and true feeling of history. 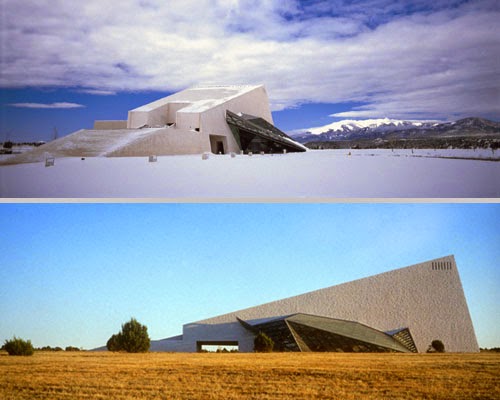 
New Mexico is justifiably called the land of enchantment. Particularly in the sparsely populated, basin-and-range region of the south, the land has a spare and stark beauty, which has long fascinated me. On the typically sunny days, the light is crisp and clean, and emphasizes the geometry of the landscape.

It is clear that architect Antoine Predock understood these qualities when designing the Spencer Theater, outside of Ruidoso. Spare in ornamentation, lacking in color, and with its clear allusions to the surrounding topography, the theater fits the landscape perfectly. As Predock’s web site describes it, “The wedge-like form of the theater suggests a monolithic piece of stone that has forced its way up from beneath the crust of the mesa.” But the building is more than just an appropriate shape.

In cladding the performance center in white Spanish limestone, Predock made an inspired but unusual choice in a state known for its tan to tawny stucco architecture. The white limestone obviously acknowledges the nearby mountain peak Sierra Blanca but it also gives the building a seasonal vibrancy; the theater seems to emerge even more gracefully out of the landscape when winter snows cover the ground. And on those ever present days of crisp and clear light, the white limestone and blue sky perfectly complement each other. 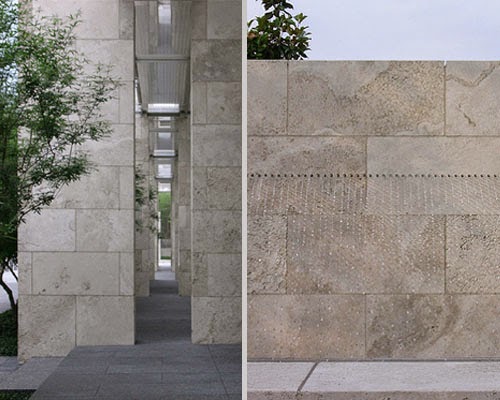 
When I was working on my book, I was told that travertine is the most commonly used building stone in the world. The vast majority of the time, and the way it has been used since the Romans built the Colosseum with it, the travertine is cut perpendicular to its bedding planes, basically analogous to looking at the side of deck of cards, as opposed to the faces. This cutting style gives travertine its well-known resemblance to Swiss cheese.

In contrast, the travertine at the Nasher was cut to expose the face, or bedding of the stone. This creates a far more beautiful and compelling stone, teeming with textures. At the one place where I have seen this face-open cut, the Getty Museum, fossil leaves regularly occur on the panels. The leaves are so well preserved that I could see insect damage and tell if the leaf was right-side up or not. They are some of my favorite stone building panels. (For my travertine chapter, I spent a day in Tivoli, Italy, at the Mariotti family quarry, which supplied the Getty’s travertine. One of the owners told me that few architects chose to use face-cut travertine because they considered it to be Getty architect Richard Meier’s signature stone.)

At the Nasher, architect Renzo Piano made a slight variation on how Meier worked his travertine. Piano left the exterior panels alone, so that the textures and fossils give the building the look of a quarry but on the interior he used polished the panels to focus more on the art and to make the stone better complement the art. I understand why he did this, and suspect he was successful, but with my geological biases, it also saddens me to see this diminishment of the natural beauty of the stone. I guess that’s a difference between an art museum and a natural history museum.

Many thanks to David for contributing the above responses and bringing his book to my attention. Be sure to check out the previous stops on the "virtual book tour" as well as the next one, Friday, at Lyanda Lynn Haupt’s The Tangled Nest.
Email Post