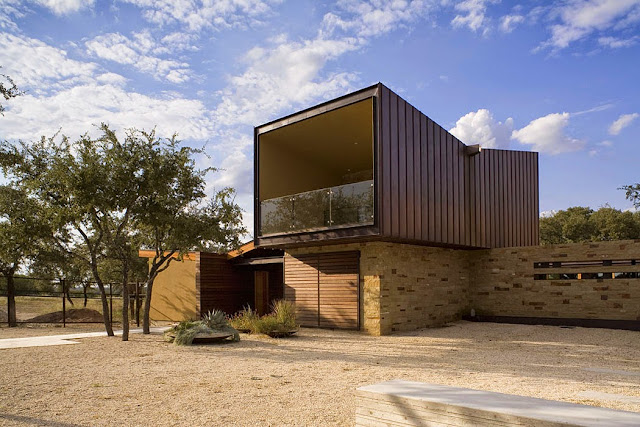 Photographs are by Paul Bardagjy.

Lake Travis was formed over sixty years ago by the construction of the Mansfield Dam west of Austin, Texas. Like other reservoirs in this and other states, the lake's use for flood control, water supply, and power generation is overshadowed by the recreational opportunities that shape the use of the waterways and its banks. This retreat by Dick Clark Architecture for a three-generation family living in Austin and Houston is aligned with these opportunities, but also the particularities of each inhabitant, setting it apart from its more traditional neighbors.

At first glance the H-shaped plan of the retreat appears to be comprised of two zones, grouped around the two courtyards. But further investigation yields a 1+1=3 parti of sorts, where the plan addresses three zones: the street, the courtyards, and the waterway. Basically, the fairly closed-off composition of walls that greets visitors points to the internal focus of the retreat, but once inside the courtyard the focus is further drawn to the social thoroughfare of Lake Travis with its boating, fishing, swimming, and other activities.

The plan's composition is two linear bars facing each other across the courtyard and connected by a gallery that can be opened by movable glass walls. Bedrooms are in the west bar (east courtyard light) and common areas (living, kitchen, dining, media room) are on the east. An elevated exercise pavilion, visible from the entry, is the only other enclosed element. It overlooks the first courtyard's pool; the second courtyard towards the water's edge is a lanai with outdoor cooking. It's easy to see how the courtyard spaces would be a nexus of activity in seasonable months.

Materials are primarily drystack (mortar-less) sandstone for the walls, limestone floors, various woods for siding and decking, and the occasional copper and onyx for effect. This palette is a highly compatible and skillful blend that is classy yet comforting and a natural fit into its context. At 9,000sf (835sm) the retreat is hardly small, but its presence belies this size, and its orientation always reiterates the importance of the outdoor spaces cradled and fronted. 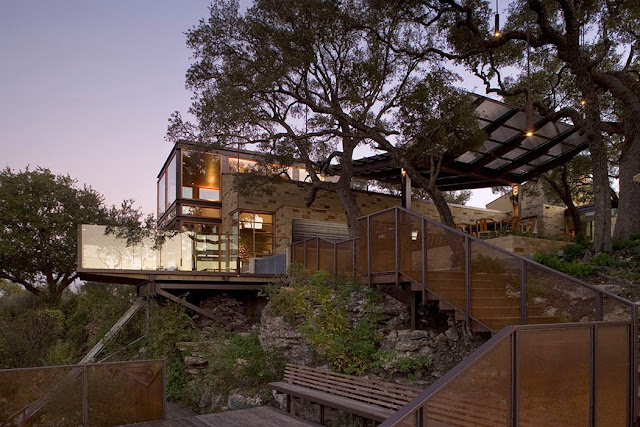 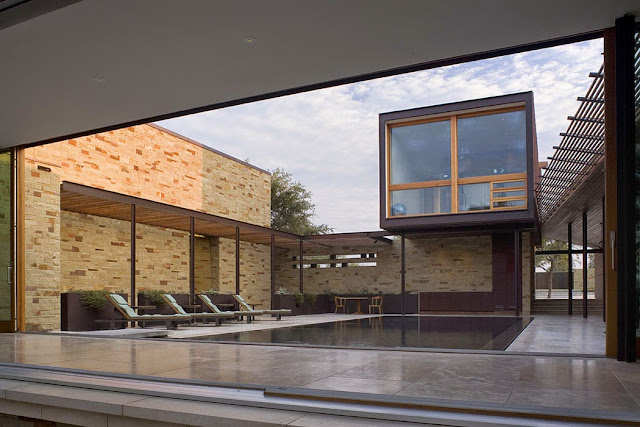 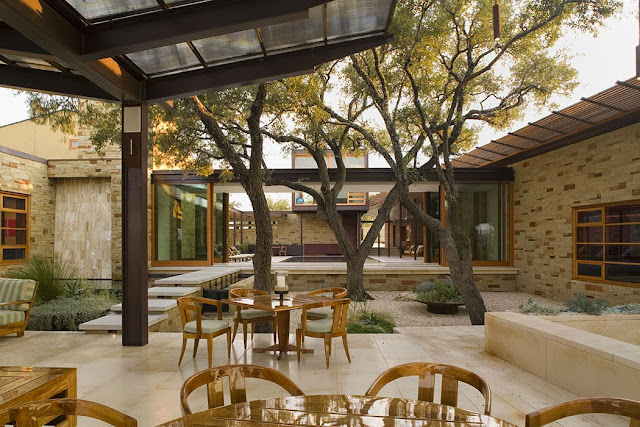 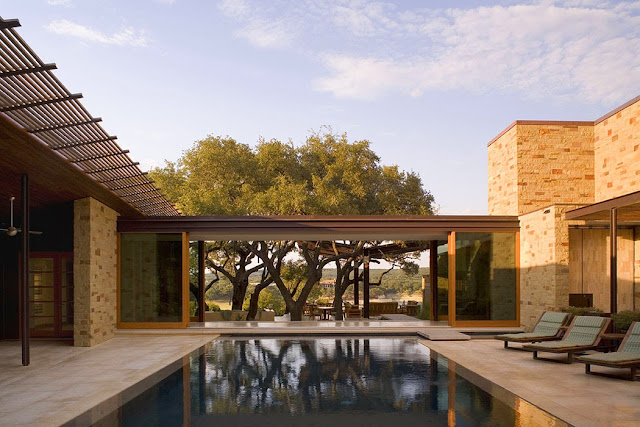 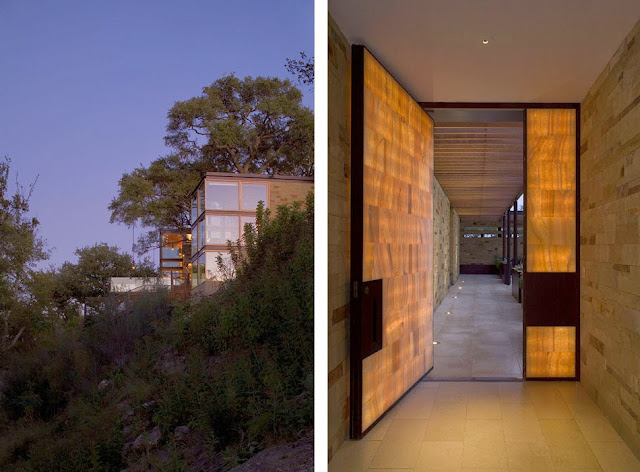 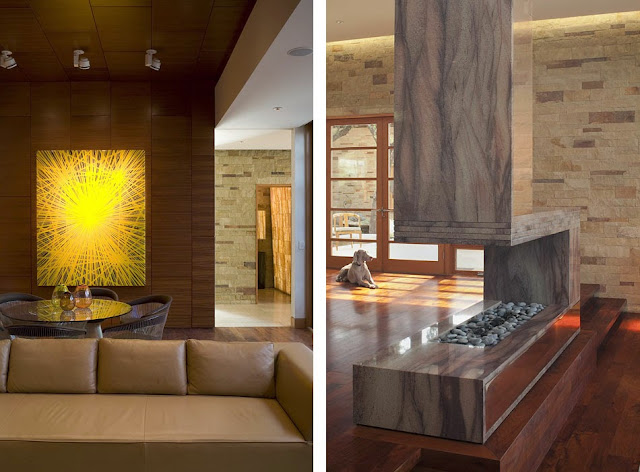 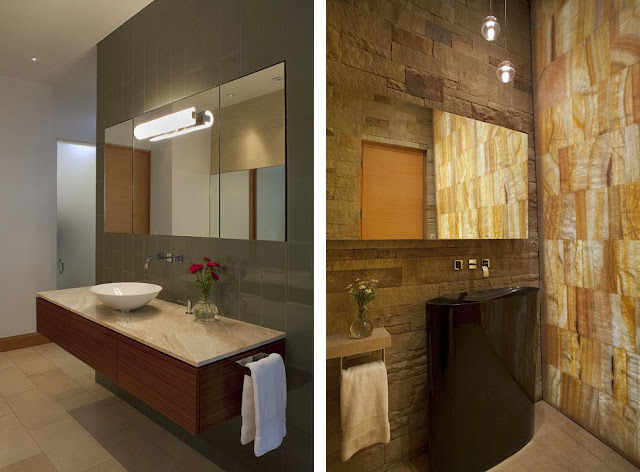 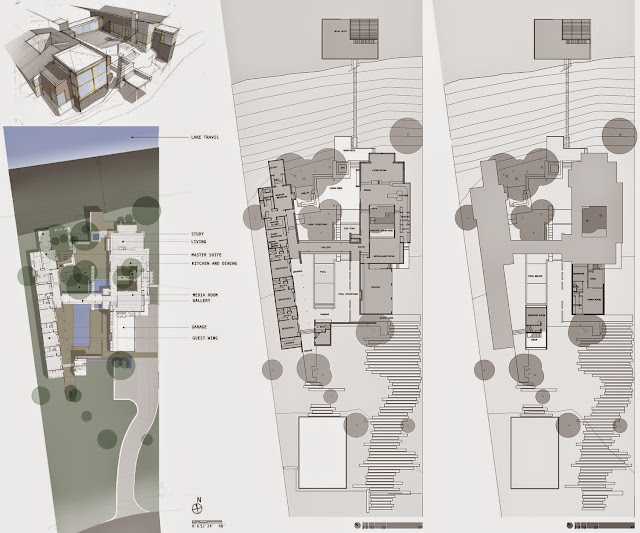 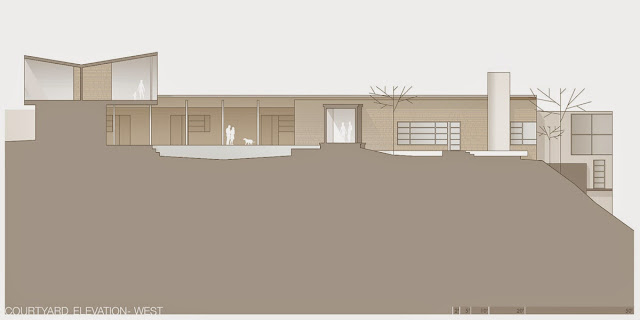