Earlier today I attended a press preview of the Contemplating the Void exhibition opening at the Guggenheim Museum. Curators Nancy Spector and David van der Leer asked nearly 200 artists and architects (a roughly 50/50 split between them) to create something that would fill the void in Frank Lloyd Wright's famous rotunda. The curators mentioned that they have scores of proposals for exhibitions in the void that went unrealized, though unfortunately they did not opt to display those alongside the predominantly one-page/2d pieces gifted to the Guggenheim for a silent auction next month. 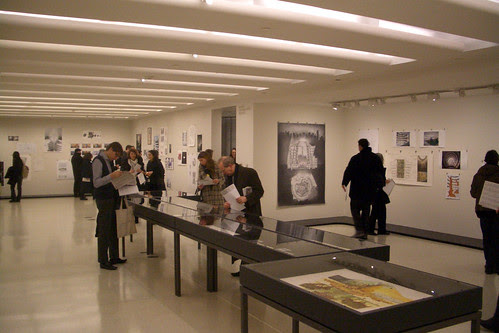 The exhibition occupies the fourth floor annex, an unfortunate but unsurprising condition. It would have been great to have the ideas that contemplate void interacting directly with it, but a quick glance reveals that the show isn't "meaty" enough to take on that large space. As is, the 193 pieces are scattered about the annex in no particular order, necessitating image and title keys (below) for those wanting to know more about the imagery. Without the newsprint, one could walk the galleries and let the images speak for themselves, free of authorship, certainly not a bad idea. 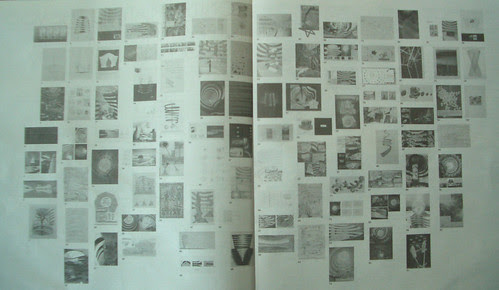 In their introduction this morning the curators described the layout as an attempt at being "as visually pleasing as possible." But I found that groupings of pieces exhibited certain themes, perhaps aligned with their visuals, be it media (computer renderings, collage, drawings, etc.), color palette, or vantage point (photo overlay, architectural drawing, diagram, text, etc.). Below are some themes I found as I considered what I was seeing, though not all follow from the adjacencies I mentioned. Images are by me and are linked to Flickr where larger versions can be found. 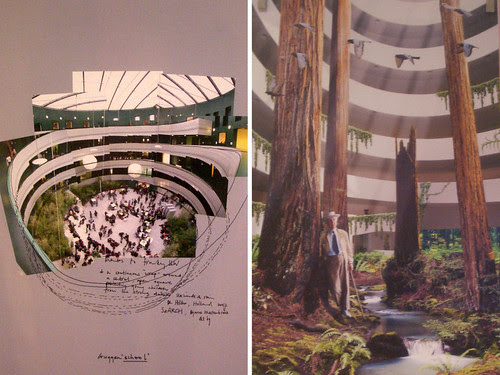 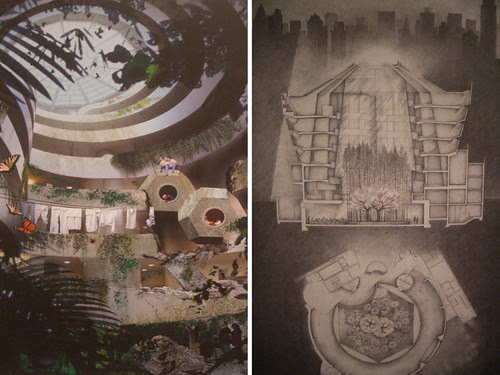 Not surprisingly, a number of contributors envisioned a rotunda filled with trees and/or other vegetation, in some cases a commentary on a dire future and in others an alternative potential for the large skylit space. 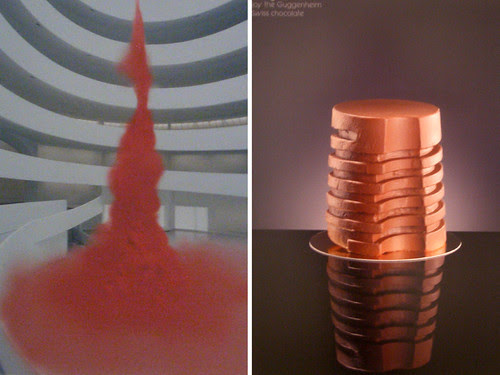 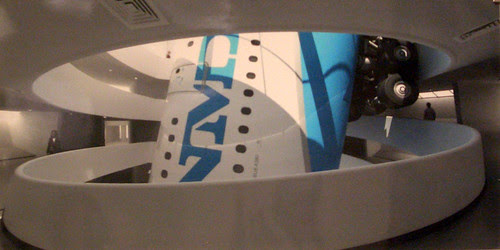 A literal filling of the void ran the gamut from liquids taking on the form of the void to various objects crammed into the space. This theme was probably the most common, though also one that overlaps many others. A subset could even be "filling the void with things hanging from above." 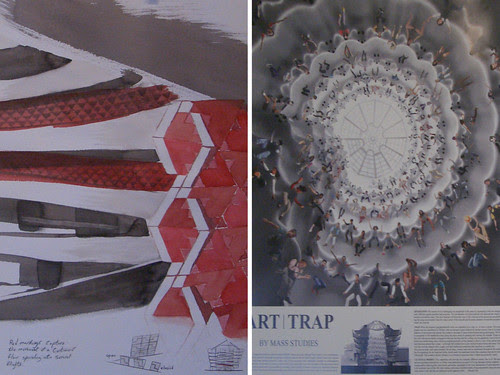 Many pieces dealt with the confines of the void itself, interacting with the ramp's balustrade in some manner. 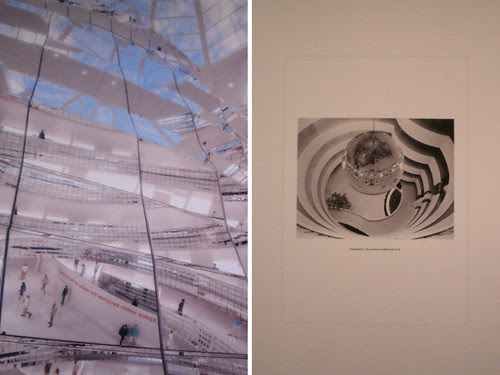 Only a few pieces explored how the central space could reflect the ramp, be it platonically (McElheny's sphere) or in a faceted and confusing manner (AL A). 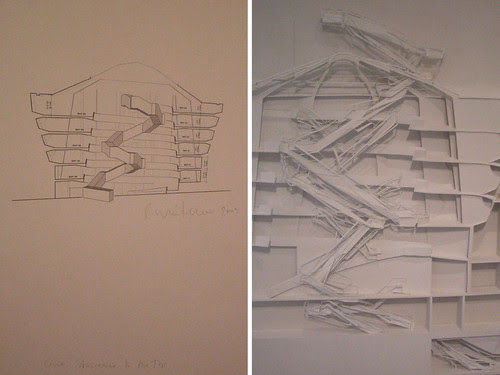 Contributors who wanted to bring people into the space of the void ultimately led people to the skylight and the sky above. 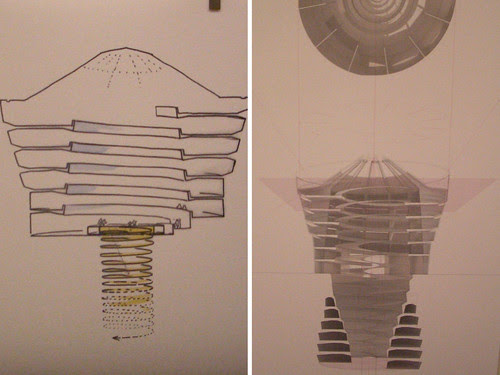 Alternatively, a number of proposals inverted the spiral either by carving from the earth or mirroring the floor to give the impression of its extension below. 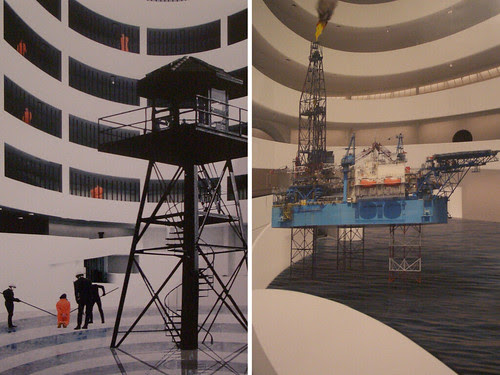 Not enough pieces dealt with larger issues, and those that did lacked subtlety. Nevertheless, the melding of Panopticon prison with circular rotunda is very spot-on, a critique of the relationship between form and function, among other things.

Activate the Void (and Museum) 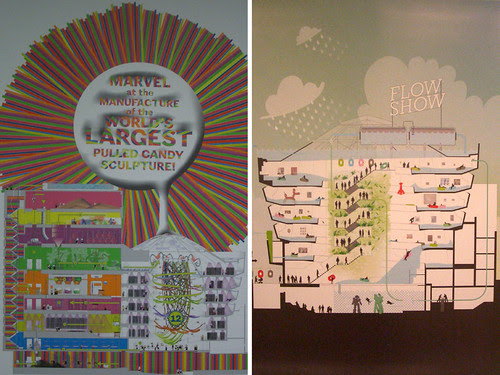 A number of proposals activated not only the rotunda but the rest of the museum. In the case of the two above -- located near each other in the exhibition -- the museum becomes a factory for pull-candy and a water park. These examples illustrate how exhibition location is tied to theme. 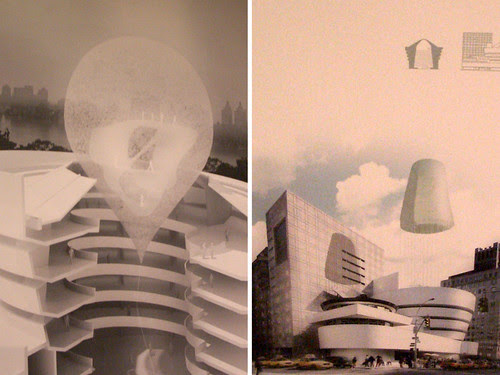 Some entries started to move beyond the boundaries of not only the rotunda but the museum itself. These desired to express the space via a solid object visible from outside. Lightweight floating objects were the norm for this approach.

Unravel the Void (Outside the Museum) 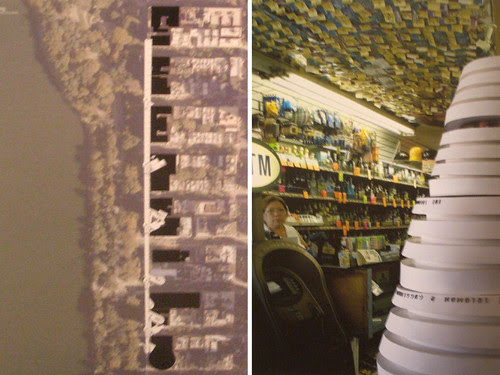 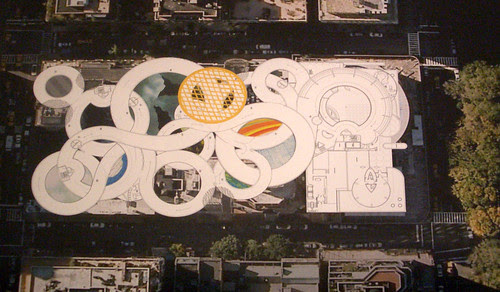 Lastly, a number of images broke well beyond the confines of the museum, in many cases unfurling the ramp up Fifth Avenue or extending it into a larger pattern of circulation overtaking the neighboring buildings. Doug Aitken's wearable Guggenheim is a funny, Beaux-Arts-esque costume that puts the person smack in the middle of the void.
Email Post