"On Roosevelt Island —- located in the East River between Manhattan and Queens —- there are no garbage bags on the sidewalks and no garbage trucks. Instead, garbage is collected from its 14,000 inhabitants via a retro-futuristic system of underground tubes. A computer empties the trash chutes several times a day, whisking away the waste of the Island’s residential towers, and zooming it through underground pipes to a transfer station at one end of the island. There it is compacted, sealed into containers, and loaded on a truck to join the rest of New York City’s waste."

Who knew? I didn't until a friend of mine who lives on Roosevelt Island recently told me about the system. Soon many more people will learn about the island's trash system -- and what can be learned from it towards "alternative futures for New York City's infrastructure" -- when the exhibition FAST TRASH: Roosevelt Island's Pneumatic Tubes and the Future of Cities opens at Gallery RIVAA (Roosevelt Island Visual Art Association) on April 22, running until May 23.

For those not familiar with New York City's non-Roosevelt Island trash "system," garbage and recycling are placed on the curb, usually the night before the designated day for the building/block/neighborhood pickup. Garbage/recycling trucks pick up the bags or empty the bins, compacting the trash before unloading at a waste disposal facility somewhere in the city before being sent to some other state (Pennsylvania or New Jersey, I think, for trash) for burying in a landfill or sorting for recycling. As the description at top shows, Roosevelt Island is unique up to the last step.

Coming from Chicago, it's obvious that Manhattan's lack of alleys creates the situation whereby curbside pickup is basically the only option, besides subterranean solutions of course. Roosevelt Island's pneumatic method is too costly and complex for extrapolation to its big brother to the west. But maybe smaller, building-scale installations in the not-too-distant future could set out clean, Wall-E-esque compacted boxes on the curb instead of piles of black/clear bags, bins or bundled papers. This doesn't alleviate the fact garbage is curbside -- and as anybody who has visited New York City can attest, removing garbage from the curbs would be ideal -- but the point here is that rethinking even the smallest steps in the current system might have larger implications. In this scenario, trucks could pick up trash more quickly, blocking less traffic and creating less of a noise disturbance with their compactors.

The idea of a network of tubes underneath the buildings that straddle Main Street on Roosevelt Island makes the occasional protuberances along the street (below) much more intriguing. Do these tubes (I'm guessing they are ventilation ducts...maybe related to the garbage collection?) connect with each other, with other tubes poking above the ground plane, their own network of shared air? We know water and sewer and now garbage is moved around via a network of pipes, but how about hot air for heating in the winter? Or cold air in the summer? Like industrial complexes that trap and recirculate heat created by various processes, one can envision something similar here where all waste (exhaust, trash, sewer) is contained and reused in some way, so no waste escapes the island. A completely self-sufficient Roosevelt Island. 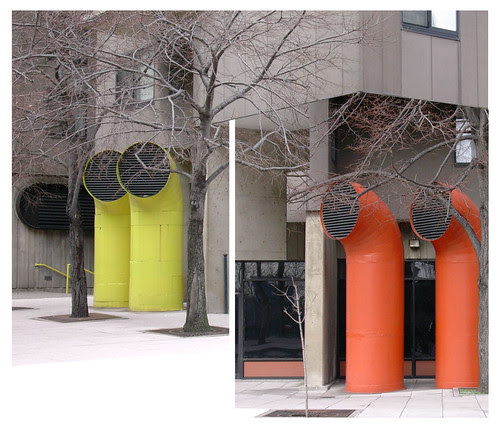 Speculation aside, it should be noted that the exhibition, curated by Juliette Spertus, will also include a symposium at NYU on May 6:

The symposium is cosponsored by the Urban Planning Department, RIOC and Envac, the Swedish manufacturer of RI’s system, in conjunction with the exhibition.