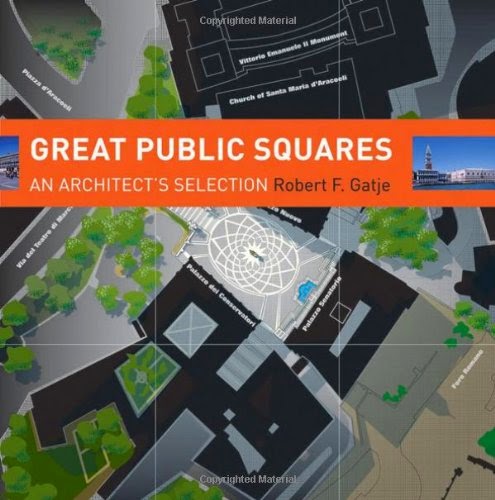 At a time when architecture books tend to focus on buildings, the objects that inhabit cities, it's refreshing to see a book squarely focused on public space, pardon the pun. Robert F. Gatje, a former partner of both Marcel Breuer and Richard Meier, has assembled plans, photos, stats and descriptions on forty squares, most in Europe. Inspired by Camillo Sitte and other authors of books on urban spaces, the CAD-generated plans are rendered consistently (per the cover) and at the same scale, accompanied by dimensions, areas and other data in an effort to make the book a comparative study. Lest the book get bogged down in top-down views of city plans, the photos and descriptions go a long way towards giving readers a sense of what each space is like, while also providing historical information on the mostly old spaces (the most recent is Pioneer Courthouse Square in Portland, Oregon, here marked by the construction start of 1981).

The lack of contemporary spaces makes me wonder if and why squares cannot be designed to the same effect as the ones presented here. Is it due to the quality and style of the buildings that overlook the squares? Is it the design of the spaces themselves? Or maybe the lack of decent spaces in cities for creating new squares? One need only look at the Project for Public Space's Hall of Shame to see that new spaces are perceived as lacking in a number of ways (empty, unsafe, uninviting, etc.). Most of the members of the less-than-illustrious list are modernist and later creations, many surrounded by newer developments or within the post-industrial landscape of cities. While PPS's list is certainly debatable, the apparent link between urban squares and the urban fabric around them is hard to deny. This is most strongly felt in Italy, from which 15 of the 40 squares in the book come. This link points to the importance of the larger context in the success of these urban spaces, not the comparative data that Gatje presents.

So Gatje has delivered a carefully and lovingly crafted book that can be seen as an homage to western history's greatest public squares, or as a lesson on how public squares can be created in a less "shameful" way. Living in New York City, I can't help but think that a number of potentially great squares exist, such as Gansevoort Plaza in the Meatpacking District and the pedestrian zones in Times Square. But as is, devoid of the care required to make them great as well as popular, the spaces merely set aside, not designed. Investments towards implementing more permanent and careful designs need to happen. When they do, Gatje's book is a very good place to learn from the successes of the past.

NOTE: Gatje will present an illustrated talk on his new book at the Center for Architecture tomorrow, April 28 at 6pm. The event is free and open to all. RSVP here.
Email Post
Labels: book-review