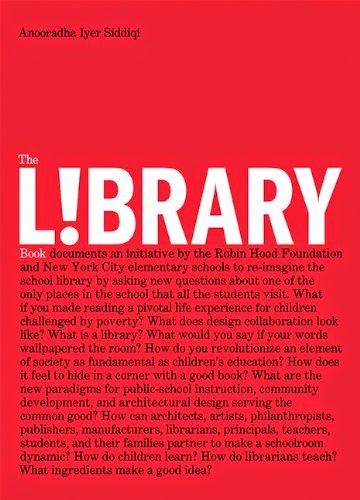 Memories of the library in my grade school are strong, even though what prevails is not the physical aspects of it but the time spent there looking at books, learning how to use computers, and being shushed for talking. I'm sure the importance of the library in my early education is a trait shared by many, so it's no surprise that the Robin Hood Foundation has focused its initiative with the New York City Board of Education on these spaces, hubs for learning both in school and after school. As the traditional aspects of the library -- books and other print media -- are being challenged by the digital, the design of libraries, big and small, is changing to encompass broader and more diverse ways of obtaining and sharing information. We find ourselves on the cusp of great changes, but the book, its storage, and what it stores are still the cornerstone of libraries in schools. That fact is evident in the pages of this book celebrating the results of the Robin Hood Foundation's first decade, from the ways casework actively shapes the different spaces in the libraries to the graphics that adorn the walls. Spaces for computers and classes are provided, but the bookcases are the defining elements for each library.

Twelve case studies are presented for libraries designed by Gluckman Mayner Architects, Leroy Street Studio, Rogers Marvel Architects, Tod Williams Billie Tsien Architects, and others, with graphic elements by 2x4 and Pentagram. The last play an important part in the success of the library designs, and about half the book is devoted to the murals and other 2d pieces that help shape the spaces in bright and captivating ways. For example, 2x4's contribution to a Gluckman Mayner library in Manhattan covers the ceiling and walls above the bookcases in a sky/cloud graphic further activated by light coverings designed with the architects to mimic the flight of birds. Many of the designers work pro bono for these commissions, but the results are not B-game. Their attention extends to selecting the location for the library (many are created by consolidating three classrooms into one space) with some great results, like a second floor space wrapping an entry stair and an attic gym complete with tiered seating and a stellar view of Manhattan. This book is also carefully crafted, thoroughly documenting the case studies with numerous photos and drawings. It makes me realize that if I would have grown up with one of these libraries I'd surely remember the space, not just the books.

Pardon the late warning: Tonight The Architectural League is hosting a panel discussion on the Library Initiative at the Scholastic Auditorium in SoHo. Panelists include Scott Lauer, Harold Levy, Henry Myerberg, David Saltzman and Lonni Tanner, with an introduction by Anooradha Iyer Siddiqi. It's moderated by Rosalie Genevro.